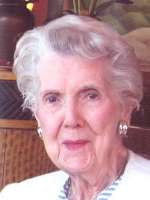 At the age of 96, she left us peacefully on May 19, 2012 in Phoenix, AZ. Born on January 9, 1916 in Pittsburgh, PA, she married William Wesley Greer, who preceded her in death in 1997. She is survived by three sons: James Greer (Meredith), Ronn Greer (Susan) and William W. Greer II. She was the devoted grandma of Bertrand Greer (Anne Marie), Erin Acuna (Bob), Buddy Greer, and Marykate Greer. She was adored by her great grandchildren: Jane Greer, Jordan Acuna, Tyler Acuna, Veronica Greer, and Conner Greer, as well as numerous nieces and nephews. Fran is also survived by her beloved sister, Ruth McHugh and sister-in-law, Charlotte Pfaffle, both of Pittsburgh, PA. Private Funeral Services and Catholic Mass are planned. Donations in her name may be made to Hospice of the Valley, 1510 E. Flower St., Phoenix, AZ 85014 or The Humane Society of Phoenix, 1521 W. Dobbins Rd., Phoenix, AZ 85041.

Offer Hugs From Home Condolence for the family of GREER, ANNA FRANCES