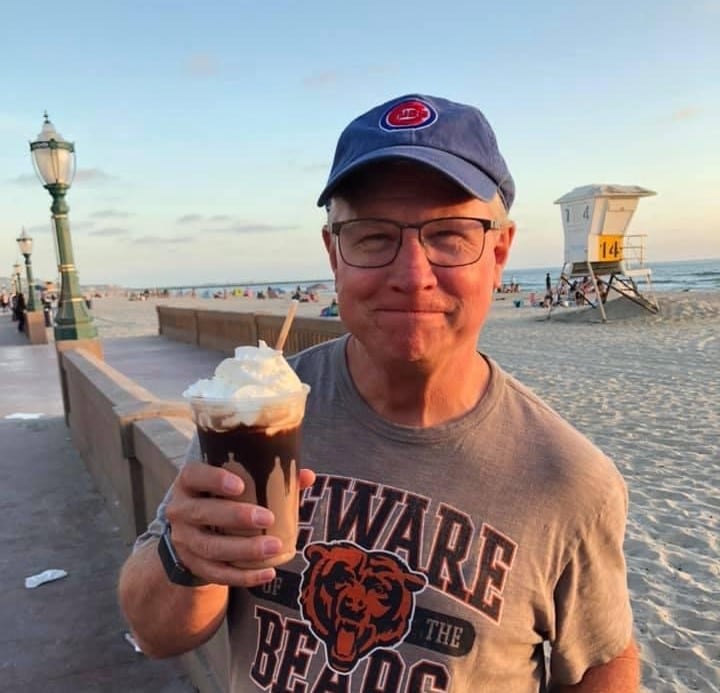 Jeffery William Greer, born February 15, 1964, in Chicago, Illinois, to William and Elanor Greer. He passed away Wednesday, August 18, 2021, in Glendale, Arizona, at the age of 57. He moved from Chicago to Glendale, Arizona, in July of 1978. Jeffrey was a graduate of Cactus High School in 1982 and lettered in baseball and basketball. He enjoyed playing men’s slow pitch softball for over 20 years. Over this time, he has made numerous friendships that he still has today.
Throughout his life he enjoyed watching his kids play sports and teaching them life lessons. If he wasn’t watching his kids play sports, he was watching his favorite Chicago teams. Another one of his passions was spending time in a beach house in San Diego and satisfying his fetish for ice cream and his extreme dislike for cheese. Monday night Football was not complete without the tradition of baking chocolate chip cookies and a couch full of his furry friends. Two of his favorite holidays were fantasy football draft day and get-togethers for competitive cornhole tournaments, (which he usually won). He was a very family-oriented man and will be remembered for blasting his 70’s disco music. His favorite TV shows were Everybody Loves Raymond (laughing hysterically), Andy Griffith, Million Dollar Listing, FBI, (and it goes without saying any Chicago themed show). Jeff was a central part of our family gatherings and will be sorely missed by his wife Sandy (32 years), his father Billy, brother Drew, sons Ryan (Tiffany), Chase, daughters Jennifer, Mena, and granddaughter Jade and his countless adoring nieces
and nephews.
A Mass will be held in Jeff’s honor on Saturday, August 28, 2021 at 9:00 A.M., at St. Gregory’s Catholic Church, 3424 N. 18th Ave., Phoenix. In lieu of flowers, Jeff would welcome contributions to his favorite charity, Arizona Humane Society.

Offer Hugs From Home Condolence for the family of GREER, JEFFERY WILLIAM