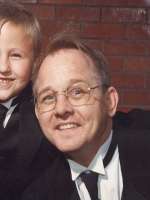 52, of Phoenix, AZ passed away on October 24, 2010. Greg was a Computer Programmer for 14 years and worked for America West in the Records Department for 8 years. He enjoyed being around people and taking pride in his work. Greg’s favorite pastimes included riding his bike, driving his Camaro (his CB call name was ‘Mr. Magoo’), traveling to the beach with his family, and watching golf. Without complaining, he battled two difficult diseases most of his life. His strength, perseverance, love, and laughter will be missed. Greg is survived by his beloved wife Dana, of 20 years; son Daniel 17, mother Gretchen Deniger, sister Tina Rhodes, brother Todd (Laura) Deniger, 2 nieces, 4 nephews, and best friend Jay Willard. Preceded in death by his father Richard Deniger and sister Diane. Private Service will be held. Memorial donations may be made to the National Ataxia Foundation designated to SCA2, 2600 Fernbrook Lane, #119, Minneapolis, MN, 55447.