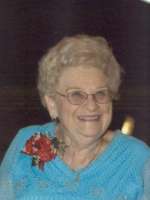 Passed peacefully on July 12th at the age of 89. She was born on June 4, 1923 in St. Paul, Minnesota to Russell and Margaret Congdon. She graduated from St. Joseph’s Academy in St. Paul. She married Art, in 1947 and in 1955 the family relocated to Phoenix. After raising a family of six boys, she became an avid player of bridge and golf with her friends at Arizona Country Club. She loved to travel with her husband and spent time at the beach in Carlsbad, California every summer. Peg was preceded in death by her mother, father, husband and son, Jim. She is survived by her sons, Tom of Fallbrook, California, Larry (Toni), John (Nancy), Mike (Lani) and Jerry, all of Phoenix, Arizona, 9 grandchildren and 4 great-grandchildren. A Funeral Mass will be held at 10:00am, Monday, August 6, 2012 at St. Francis Xavier Catholic Church, 4701 N. Central Avenue, Phoenix. Interment to follow at St. Francis Cemetery, 2033 N. 48th Street, Phoenix. In lieu of flowers, the family suggests contributions to Hospice of the Valley, Ryan House, 110 West Merrill Street, Phoenix, AZ 85013-4500. Arrangements entrusted to Whitney & Murphy Funeral Home.

Offer Hugs From Home Condolence for the family of GRUCKY, MARGARET M. “PEG”