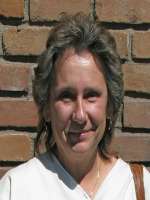 Frances M. Guarino born August 24, 1955 passed away on September 5th, 2010. She is survived by her father, William Guarino, brother David, sister-in-law Barbara, nephew William, niece Anna and numerous friends. Frances graduated in 1974 from East High School in Phoenix and subsequently pursued a photography degree from Phoenix College. While attending college she worked at Baskin & Robbins where she was promoted to store manager. Her love of photography led her to pursue a second job as Freelance Photographer for the Daily News Sun. She continued doing freelance work until 1996. She then switched careers to become a medical office secretary and later a document control clerk. Frances had a unique personality which brought smiles and laughter to many. Her friends and family enjoyed her eclectic taste in interior design and entertaining, the many “girls’ barbecues,” and her traditional barbeque-grilled Thanksgiving Turkey with roasted green chilies. She enjoyed NFL games and was a loyal 49’ers fan. She was also a committed supporter of animal rescue organizations and was hopelessly dedicated to her rescue feline companions. A Memorial Service will be held at 3:00 PM on Saturday, September 11th, 2010 at Whitney & Murphy Funeral Home, 4800 East Indian School Road, Phoenix AZ. In lieu of flowers please send donations to Best Friends Animal Society, 5001 Angel Canyon Road Kanab, Utah 84741-5000.

Offer Condolence for the family of GUARINO, FRANCES MARY