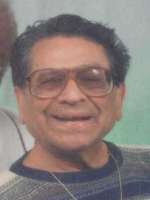 82, of Phoenix, passed away on November 10, 2010. Charles was born on September 21, 1928 in Morenci, AZ. There he was raised and graduated from Morenci High in 1947, where he was prom king and beloved friend to many, before marrying Isabel Valles September 1949 to whom he was married to for 61 years. In his younger years, he was a musician who sang and played the guitar and drums at the dances during the 1940s with the Herb Aguilar orchestra. In his later years, he enjoyed spending time with family on holidays and birthdays. He worked at Phelps Dodge Mining Company as an Electrician for 35 years before he moved to Phoenix in the 80s and worked as a security guard before he retired. Husband, Father, Grandfather, Great-grandfather, Godfather, and Beloved Friend to many. Charles is survived by: Wife Isabel, children Charlie, Danny (Denise), and Rosalie (Fred). Grandchildren: Leslie (Gabriel) and Kathy (Gabriel). Great grandchildren: Noah, Andrew, and Elia. Funeral Service will be held Thursday, November 18 at 1 p at Whitney & Murphy Funeral Home, 4800 E. Indian School Rd. Phoenix, AZ.

Offer Hugs From Home Condolence for the family of GUERRERO, CHARLES M