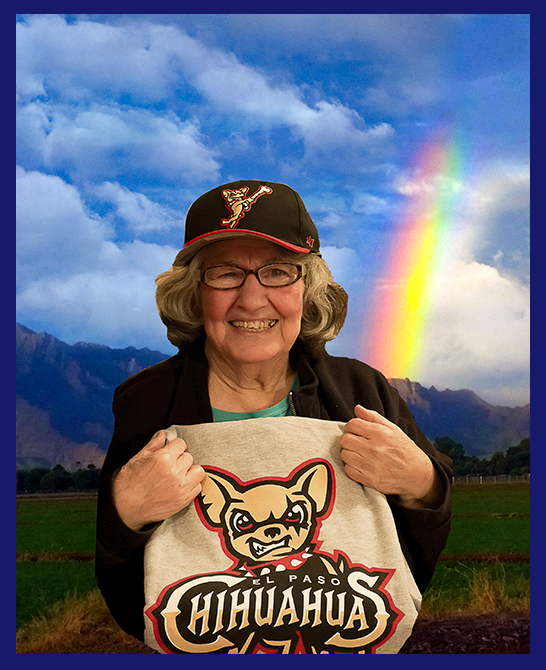 Guadalupe S. Gutiérrez also known as “Lupe,” gave life her best and on Wednesday, February 28, 2018 she joined her Angels, parents (Ricardo and Rosalia Campos de Saenz) sisters (Cerila and Augustina Saenz), brothers (Daniel, Lino, Cleofas, Francisco, and Bernardino Saenz) husband of 56 years (Candelario Gutiérrez), youngest son (Alfredo Gutiérrez), grand-daughters (Melissa and Marisa Gutiérrez) and son-in-law (Humberto B.Rosales), as well as her “comadres” Mary Gonzales and Molly Blanco into Paradise. She was surrounded by all her children; a beautiful and spiritual experience unlike anything we had ever experienced before! Mom/Nana, thank you for sharing your tumultuous gifts, your unconditional and steadfast love, devotion and endurance! We were the light of your life and you will remain the light of our hearts.
She was born in Parral Chihuahua, Mexico June 1, 1935. In 1950 she migrated to the United States with our father and began to raise our family in Arizona in the early 60’s. A homemaker at heart; food was always on the table no matter what time you dropped in to visit; everyone was pleasantly surprised with whatever she served. An incredible seamstress, crafty with her needlepoint and crocheting skills too; used all her talents to contribute financially to meet the demands of her growing family. When she was challenged to join the workforce she graciously accepted it and became one the best team players anyone would want on their team. She worked at the Steward Sandwich Company where she rapidly moved up the ranks and became Supervisor. Due to her limited English, she figured key words and phrases to impress her employer, and continued studying between breaks so that she could master the details of her responsibilities. She always carried a spiral notebook to write down unknown words, phrases and sketches of things she would later look up in her dictionary or ask one of her children during the homework hour(s). Her math skills were beyond comprehension for someone who only completed sixth grade in Mexico. While teaching her grand-children how to learn their multiplication table, or mathematical problems, she always had a trick to help them master those problems. Her creative mind didn’t only end in sewing and crafting, she was an incredible innovator. Had she gone to college we believe she would have earned a degree in Engineering because she created and designed tools that were so unique to make things work around her house; she truly was a MacGyver! Whether it was a water spout to water her plants too high to reach or straw hats to scare the pigeons away while growing her grass; she had an incredible mind that never stopped working and creating! Her faith and spirituality was enriched when she became a Cursillista. She was an avid reader and sport fan; especially basketball. She was also Marisa’s (grandchild) first basketball coach. When life threw her lemons not only did she make lemonade she shared it with everyone in need. She loved learning; and in spite of not earning her own degrees, she ensured that all her children and grandchildren completed their BIG DREAMS. She always said, “DREAM BIG” and if you fall short of that BIG DREAM you will still be in a good place to be happy! Mom/Nana, today we say thank you for DREAMING BIG, we are who we are because you DREAMED BIG! Rest in peace with all of our other Angels; until we meet again, we will always carry your BIG DREAM in everything we do! With immense respect and honor we love you!
Lupe will be lovingly remembered by brothers Lencho and Manuel Saenz, children Francisco Gutiérrez, Blanca Estela Gutiérrez, José Gutiérrez, Richard Gutiérrez and Yolanda (Maria) David Gutiérrez, grandchildren Trina (Gil) Negrete, Manuel Gutiérrez, Vanessa Gutiérrez, Marta (Tim) Guzzo, Gabriel Gutiérrez, Alexis Gutiérrez, great grand children Alicia Negrete, Maricela Gutiérrez, Izabela Gutiérrez, Roman Gutiérrez, Jaymz Guzzo, Jayliana Guzzo and Liana Negrete and her a host of nieces and nephews and her special BFFsBFFS Bessy Chavez and Parthenia Griffin. We would like to give special thanks to Hospice Promise, especially Andrea and Marsha, Mom’s special angels!
A visitation will be held on Thursday, March 8, 2018 from 6:00 P.M. – 8:00 P.M. with a Rosary at 7:00 P.M. at Whitney & Murphy Funeral Home, 4800 E. Indian School Road, Phoenix. A Funeral Mass will be held on Friday, March 9, 2018 at 11:30 A.M. at Sacred Heart Parish, 1421 S. 12th Street, Phoenix. Interment will follow at St Francis Catholic Cemetery, 2033 N. 48th Street, Phoenix.

Offer Hugs From Home Condolence for the family of GUTIERREZ, GUADALUPE