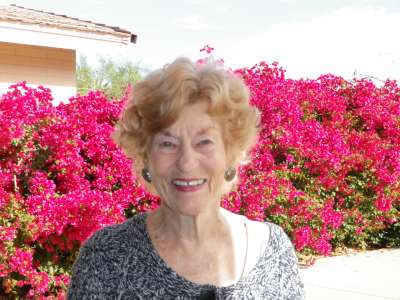 Josephine S. Haas, 89, of Paradise Valley, Arizona, passed away peacefully on February 2, 2014, surrounded by her loving children. Josephine was born April 20, 1924, in Independence, Kansas, the sixth of seven children born to Hedwig (Hattie) and George Steinberger. With her easy laugh and generous, caring spirit, Jo brought sunshine to everyone she met. Her endless energy and can-do spirit were honed through the Depression years, helping her immigrant mother and many brothers and sisters to survive the loss of their father. During World War II, she was in civil service at Davis Monthan Air Force base in Tuscon, occasionally hitching a ride to meetings via P 38 Lightning. Jo married her childhood sweetheart and next-door neighbor, Alex, beginning 65 years of what she called their “storybook life”. They ran his family’s clothing store until relocating to Phoenix in 1959. As a devoted wife and mother of three, Josephine took homemaking to new heights. She studied photography to capture unforgettable portraits of her growing family, including what she dubbed “the sixth member of the family”, a huge oak dining table where she served innumerable family feasts. From her innovative and “gutty” home décor to her astonishing garden, she created a home that was filled with love and learning. Josephine was a model of living her lifelong Roman Catholic faith. Her spiritual home was The Franciscan Renewal Center, where her heartfelt lectoring was always accompanied by the beautiful fashions she wore. She will be dearly missed by her three children, Morris, Marilyn and Bruce, her eight grandsons, and all those whose lives she touched. A Memorial Mass will be held at the Franciscan Renewal Center, 5802 E Lincoln in Scottsdale, on Saturday morning, February 8, 2014 at 1000 am. In lieu of flowers, donations are suggested to the Franciscan Renewal Center.

Offer Hugs From Home Condolence for the family of HAAS, JOSEPHINE S.