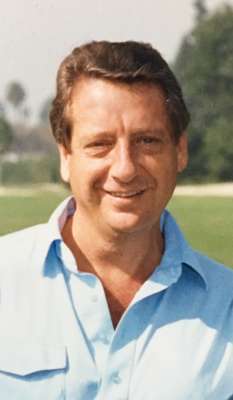 Christopher Michael Haenel died peacefully in a golf shirt at 79 on September 10, 2016. Chris battled Parkinson’s with courage, dignity and grace. Chris is survived by his younger brother Larry, half-brother Robert Guttman, half-sister Renee Levine, his favorite and only son, Michael, his daughter-in-law, Betsy, Michael’s mother, Patsy Jedynak, and his five grandchildren: Michael Jr, Philip, Patrick, Peter, and Katie. He is also survived by ex-wives: Nancy Larkin, Ginny Haenel, and Arlene Golonka, nieces, nephews and many other loved ones. He was born in Berlin, Germany and raised in Los Angeles, CA. Chris attended Loyola High School and graduated from Notre Dame High School. He then sailed the Seven Seas with the United States Navy in 1955. Chris was a true entrepreneur that loved to compete. He started his career with Southern California Bonding, purchased Metropolitan News, developed commercial projects in Palm Desert, owned Western Golf Car, ventured back with Southern California Bonding and ended his business career as a partner with California Civil & Judicial Bonding. He worked hard and played harder. He loved the game of golf, action and hanging with his grandkids. His sense of humor was contagious, his love of animals was abundant and he always had an interesting and introspective view. Chris was a loving father/grandfather, friend and mentor to many. He truly was a Man for Others. There will be a private family service in Phoenix, Arizona. In lieu of flowers, donations can be made to Muhammad Ali Parkinson’s Center / Barrow or Brophy College Prep. “Laugh and Grow Strong.” – Ignatius of Loyola

Offer Hugs From Home Condolence for the family of HAENEL, CHRISTOPHER MICHAEL “CHRIS”