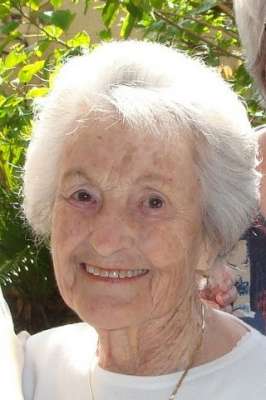 99, of Phoenix, AZ, passed away at home on March 30, 2016 surrounded by her family.  She was born in Nebraska on September 1, 1916, second oldest of nine children of Lawrence W. and Blanche (Burke) O’Malley. She was a kind and gentle woman who was devoted to being a wife, mother, grandmother, sister, friend and member of the Catholic Church.  Her life was filled with doing for others and rooting for her favorite sports teams. All who knew her loved her generous spirit and heartwarming smile. Ednamarie brought love and joy to the world; she left it a better place.

Ednamarie grew up on the family ranch in Holt County, Nebraska. She received her early education at a rural Chambers school and graduated from St. Mary’s Academy in O’Neill in 1933. She attended Wayne State College and Lincoln School of Commerce. Ednamarie taught school in a one-room schoolhouse in O’Neil Nebraska for three years and then worked for the Holt County tax office. She and her sisters lived and worked in Denver and then Philadelphia during WWII.  She married Thomas M. Haggerty of Crabtree, PA – a retired Army Air Corps pilot – on September 1, 1945.

Ednamarie and Thomas moved to Phoenix in 1947 where they began raising their 8 children who attended St. Francis

Elementary School, Xavier and Brophy high schools and Arizona State University.  A member of the St. Francis Xavier Parish in Phoenix for 55 years, she was involved in a variety of ministries and was recognized by pastor, Fr. Daniel Sullivan, S.J. as being an example of “a woman for others” through her love for the faith community.  She was also a volunteer at the VA Hospital and a supporter of St. Vincent de Paul.

Ednamarie was preceded in death by her parents, Lawrence W. and Blanche O’Malley; her husband, Thomas in 1975; and two sisters, Sister Mary Faith, OP  and Eileen Dowd and a brother Joseph O’Malley.

A Mass of Christian Burial will be celebrated at St. Francis Xavier Catholic Church, 4715 N. Central Avenue, Phoenix on April 9, 2016 at 12:30 pm.  A private burial will be held at St. Francis Catholic Cemetery immediately following the funeral.  The reception will be at a family member’s home at 3:30 pm. In lieu of flowers, donations may be made in Ednamarie’s memory to the Society of St. Vincent De Paul, P.O. Box 29074, Phoenix, AZ 85038-9074. Please add your condolence online at www.whitneymurphyfuneralhome.com

Offer Hugs From Home Condolence for the family of HAGGERTY, EDNAMARIE