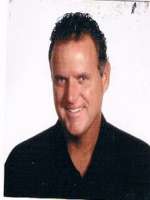 Family and friends are saddened by the loss of Bruce Hannay, 57, who passed away on September 22, 2013 after a long illness. Born on September 20, 1956 in Seattle, the family moved to Phoenix in 1960, and then Prescott in 1966. Bruce graduated from Prescott High in 1974, and graduated from the Arizona State University School of Business in 1978 with a Bachelor of Science Degree. He did post-graduate study with the University of Pennsylvania Wharton School of Business.

At 21 he was hired by Paine Webber as their youngest stockbroker to date, thus beginning a lengthy and successful career, eventually with several firms. In two years he was appointed assistant manager of Paine Webber’s Scottsdale office. Soon attaining a rank in the top one percent of stockbrokers nationwide, winning a multitude of awards and trips, he continued in the securities business until retiring from Merrill Lynch in 2008 with a diagnosis of an Alzheimer’s-related disease.

Prior to that, Bruce’s many endeavors and passions included sports enthusiast, both as athlete and spectator, excelling in basketball, baseball and golf, and participating in many other sports. He was an avid photographer and collector of art and books. He enjoyed extensive travel, having visited most of the continents. Perhaps his greatest passion was for the automobile, collecting prize-winning antique race cars, as well as many other fine automobiles.

He took great pleasure in his three children. He was a generous, loving and devoted father. Charming, good-natured and well-regarded by all who knew him, he possessed a sharp intellect and a keen sense for seeing the humor in everyday situations.

His family and many friends will miss him terribly. He is survived by his parents, Robert and Joanne Hannay of Phoenix and Prescott, daughter and son-in-law Stacy and Tarik Salahuddin, son Tyler Hannay, daughter Charli Hannay, brother and sister-in-law Craig and Carrie Hannay, all of Phoenix, and sister and brother-in-law Diane and Chris Smith of Atlanta. A private Celebration of Life to be held.

Offer Hugs From Home Condolence for the family of HANNAY, BRUCE I.