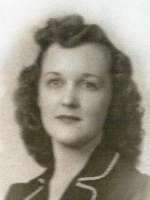 Jean D. Hanneman, 91, of Scottsdale, AZ passed away on July 26, 2012. She is survived by her son LeRoy Hanneman Jr. (Carolyn), daughter Tina Hanneman, sister Elva Miller, grandchildren Lauren, Katharine and Andrew Hanneman, Julie White (Robert), Michael, Katherine and Nicole Fox, Heidi Gordon (Michael) and Laura and Terry Billings Jr., as well as many great-grandchildren, nieces and nephews. Jean was preceded in death by her devoted husband of 58 years, LeRoy “Red” Hanneman Sr., daughter Sue Hanneman, son Terry Billings and nine siblings. Jean and Red married in 1945 in Sterling, IL after he returned from serving in World War II. They moved to Phoenix in 1956, where she worked for APS, served as a voting precinct committee organizer and was active in the Arcadia Women’s club. After retiring, Jean spent much of her time travelling the country with Red organizing reunions for the Third Armored Division Association. She also published its newsletter for many years. Jean and Red especially enjoyed their travels to Europe and Alaska. In the years after her husband passed away , Jean liked to read, write poetry, do crossword puzzles, visit with her family and friends, and attend Third Armored Division reunions. She also loved listening to the tunes of the Big Band era and watching The Lawrence Welk Show on Saturday evenings. A Memorial Service for Jean will take place Monday, August 20, 2012 at 9:30am at Whitney & Murphy Funeral Home, 4800 E. Indian School Rd., Phoenix. Inurnment will follow at the National Memorial Cemetery of Arizona.

Offer Hugs From Home Condolence for the family of HANNEMAN, JEAN D.