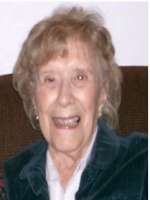 With both joy and sorrow we wish to announce the passing of our most gracious and loved family member, Artis Marie Hart on Saturday the 14th, 2013.  As a family we are joyful for the privilege of having been loved and nurtured by her strength and wisdom however we feel sorrow, selfishly of course, because we will miss her very being as she has been the moral compass of our family. Artis was born on May 28, 1918 in Morenci, Arizona.  She was the second child of the late Enrique Davila Cruz and Jesusita Aragon Cruz. She attended Phoenix Union High school.   In 1941 she married Andrew A. Maldonado and from that union, Claire, was born.  Artis was later divorced.  Artis worked as a secretary for Standard Oil of California, Utility Trailer, the City of Phoenix, and ultimately for the Bureau of Reclamation, Parker Davis Project where she worked for twenty-five years. In 1961 she met and married Arthur A. Hart and what followed was (as she said) the happiest marriage one could have.  Though Artis and Art traveled extensively throughout their lives,  Artis’ main preoccupation in life was that of a most loving wife to Art, and a caring mother to Claire as well as a supportive Grandmother to her grandchildren, Erin Michelle, Christian Daniel and Cheryl Claire Deeny and to her great grandchildren,  Chad and Chase Denton and Jasmine Mason and Dylan Deeny.

She is survived by her cherished sister and best friend Emily Cruz, her “buddy through life”, and her beloved brother Gilbert Cruz (Eva).   Artis is preceded in death by her parents and her brothers Armando and Enrique Cruz and her sister Emma Muller.  The family extends a special thank you to Jeremy and Kara Knorr, to Susan and David Colvin, to Barbara and Guido D’Adamo, to Mike Schulte, to Gloria Brown, to Greg Hedmark and family and to Patricia and Efran Mendoza who have been her guardian Angels, each watching over her daily, allowing her to live independently in her home to the ripe age of 95 young! Graveside Service will be held December 26th, 2013 at 3:00 PM at Saint Francis Catholic Cemetery Mausoleum.

Offer Hugs From Home Condolence for the family of HART, ARTIS MARIE