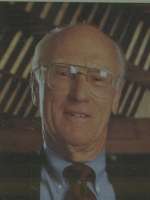 Born February 28, 1926 in Des Moines, Iowa, parents B.R. Sherman and Louise Silzer. Died August 2, 2011 in Phoenix, Arizona. Jack is survived by his beloved wife, Harriet and his five children: Elizabeth (Nick), Caroline (Gary), Chris (Rhoda), Cindi (Rollah), Suzie (Tony) and also his five grandchildren he adored: Bryan, Matthew, Nikolas, Rik, and Katie. Jack grew up in Southern California. He joined the United States Navy at age 17 and served in the Pacific Theater during World War II. He received an honorable discharge from the Navy in 1946. He attended Claremont Men’s College, now Claremont McKenna College, and was a member of the 1950 Pacesetters, the first four year class to graduate from the college. After graduation, he was employed at Atlantic Richfield. In 1955, Jack moved to Arizona and co-founded Haskell-Thomas, then formed the J.C. Haskell Corp. which he owned until his retirement. Jack was a strong athlete and was devoted to young people. For many years, Jack coached Little League and girls’ softball. His daughters loved playing for him. An outdoorsman, Jack was an avid sailor and skier. He was also a master craftsman. Jack and Harriet designed and built a stunningly beautiful log cabin in the pines of Flagstaff that they loved and which was the site of many happy memories and family reunions for the children and grandchildren. Since 1964, Jack was a devoted member of Second Church of Christ, Scientist, Phoenix and was also a member of Christ Church of the Ascension. Jack held memberships in the Phoenix 100 Club, Valley Field Riding Club and Phoenix Air National Guard (PANG). “A man is not judged by how much he loves, but by how much he is loved by others.” Jack loved his family and friends with all his heart and was beloved by all who knew him. Memorial Service will be held at 10:00 a.m. on Saturday, August 6, 2011 at Christ Church of the Ascension, 4015 E. Lincoln Dr., Paradise Valley, AZ 85252. A reception will follow the memorial service in the parish hall. In lieu of flowers, please send donations to the Phoenix Air National Guard Patriots (PANG, 777 E. Thomas #210, Phoenix, AZ 85014) or in Jack’s name to the charity of your choice.

Offer Hugs From Home Condolence for the family of HASKELL, JACK C