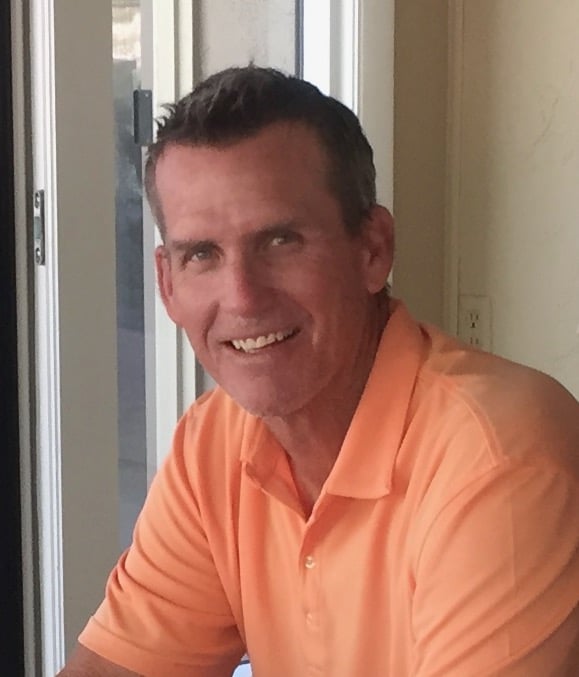 Brian Paul Haugen, 55, passed away on October 10, 2020, from early-onset Alzheimer’s Disease. Brian was born July 17, 1965, in Minneapolis, Minnesota, to Harry and Ellie Haugen. His family moved to Phoenix when he was nine months old and Brian always considered himself a proud, native Arizonan. He truly enjoyed everything the state had to offer, from camping on the Mogollon Rim to boating on Lake Powell to hiking the Grand Canyon, and of course, golfing! These were among Brian’s fondest memories because he was able to enjoy these activities with his extended family and friends.

Brian attended Gerard Catholic High School where he excelled in athletics. It was not unusual to see his name mentioned weekly in the newspaper citing his many accomplishments. As a junior, he was a member of the state championship winning baseball team. As a senior, he was named to the all-conference football team, the all-state baseball team, and his classmates even voted him “most athletic.”
He graduated from Gerard in 1983, where he met and maintained dear, lifelong friendships. Throughout the years, this tight-knit group brought Brian comfort and happiness. These precious friends were just always there for him.

Brian enrolled at Arizona State University and graduated from the Walter Cronkite School of Journalism in 1995. He began his career in sales soon after and it wasn’t long after that when he met his future wife, Alexia Hotis. They were married in 1996 and went on to have four beautiful children—Aidan (20), Lucas (19), Zachary (17), and Aleena (14). He was so proud of his kids. He loved being involved with their activities, whether it was coaching Little League, watching a martial arts tournament, or cheering during volleyball games, swim meets, or baseball games. He also enjoyed sharing his love of hiking and camping with his kids. These were the things that brought him the most joy.

That joy was only increased whenever Brian was in the presence of his ever-so-loving, incredible family. From his mom and dad, to his brothers and sister, aunts and uncles, and numerous cousins, there are not enough words to say how much they meant to him and even defined him. Family gatherings throughout the year were highlights for Brian and he treasured those times. Brian would light up a room when he walked in. His green eyes, charming smile, humor and quick wit will be greatly missed.

Brian is survived by his wife of twenty-three years, Alexia; children, Aidan, Lucas, Zachary, and Aleena; parents, Ellie and Harry Haugen; brothers, Shawn and Kevin (Sara); sister, Colleen (Steven) Schulz; aunt, Kathleen Gabrielson; his many close cousins, nieces and nephews, and treasured friends.
Brian’s family would like to express their deepest gratitude to Pacifica Memory Care and Americare Hospice who cared for Brian with such love and compassion.

Funeral services will be held Saturday, Oct 17, 2020 at 10:30 a.m., at Holy Trinity Greek Orthodox Cathedral, 1973 E. Maryland Ave., Phoenix, AZ 85016. Due to COVID precautions, masks are required in the Cathedral and attendance is limited to 150 people. Please plan to arrive early so you have the necessary time to enter and be seated safely. You also have the option to view the services via livestream: https://www.facebook.com/holytrinityphx.org. This link can be visited any time after the event, as well. In lieu of flowers and in Brian’s memory, an education fund has been set up for his four children: https://www.gofundme.com/f/brian-haugen-memorial-kids039-education-fund.

Offer Hugs From Home Condolence for the family of HAUGEN, BRIAN PAUL