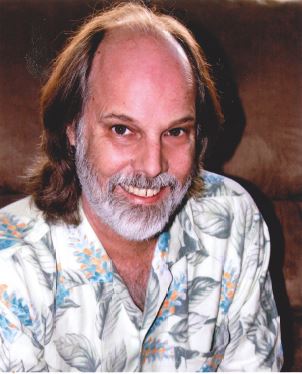 On September 12, 2019, Kevin Hawkins, loving husband, father and grandfather passed away at the age of 63.
Kevin was born in Hollywood, California on March 1st, 1956, just hours past being a leap year baby.
Kevin grew up watching James Bond and playing near Grauman’s Chinese Theatre.
In the 7th grade he followed his brother Kermit into the Army Navy Academy in Carlsbad, California. Kevin excelled and finished high school one year early with honors.
Kevin moved to Seattle following his mother, Jo Berg and new stepfather, Don Berg. Kevin worked in restaurants until he became a flight attendant for 10 years. Kevin and DeLawn met in September 1980. At 24, Kevin joyfully became her partner and father to her 2-year-old son, Ryan. In 1988, Kevin and DeLawn were married in Las Vegas. Kevin retired from the airline and started a business printing menus and small signs for buffets. Together they started an apron business that is still growing larger by the year.
Kevin has lived a simple and happy life, full of laughter and love. He leaves behind…his best friend and wife DeLawn, his brother Kermit, his son Ryan and his wife Erica and their two beautiful grandsons, Jamie and Westly.
A Memorial Service will be held on Saturday, October 19, 2019 at 10:00 AM at Whitney & Murphy Funeral Home, 4800 E. Indian School Road, Phoenix, with a reception to follow.

Offer Hugs From Home Condolence for the family of HAWKINS, KEVIN BLAINE