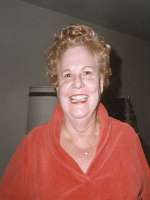 March 14, 1921 – May 20, 2011
Joan was born an identical twin in Covington, Kentucky to Henry and Lula Heile. Joan chose to never marry and pursued a successful career in the retail industry. She had an opportunity to see the world buying accessories for two of the top retail stores in the country, Saks Fifth Avenue and Godchaux’s of New Orleans. She was a strong woman who was kind and giving to all. L She cared for both of her sisters and their husbands in their final days and would always lend a helping hand to a friend. Joan was loved by all and will be greatly missed by her niece and nephew’s and their families along with all her friends. A Memorial Service will be held at 10:30am, Saturday, June 4, 2011 at Whitney & Murphy Funeral Home, 4800 E. Indian School Road, Phoenix, AZ.

Offer Hugs From Home Condolence for the family of HEILE, JOAN C