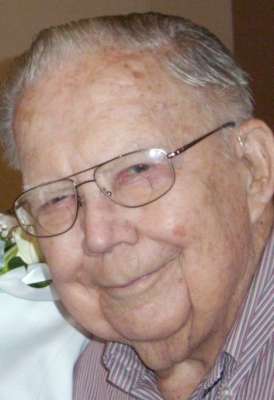 The sweet, kind, gentle soul that was Harold Heisser, 97, was lifted up to Heaven on August 8, 2014.  Harold was born on June 8, 1917, to the late Charles and Olive Heisser, in Flagstaff, AZ.  The family moved to Phoenix four years later.  Harold called Phoenix home for most of his life.  At 16, he went to work for a company called “Copper Roofs”.  At 19, they started sending him around the country to supervise the installation of this special roof.  He worked in 17 states and a territory by the time he was 22.  Harold then went to work at Williams Air Force Base in aircraft maintenance.  Because he knew how to fly, he was sent to teach potential young pilots their basic training in several types of planes, including biplanes!  He also spent a short time in the Ferry Command.  However, he was sent back to his old job at Williams when it was found out that he had broken his back TWICE!  At the time of his retirement from Williams, in 1961, he was shop superintendent; had 1200 people working under him; and, although a civilian, had the equivalent of the rank of Colonel.  Harold then started a new career in real estate.  He was very successful both as a salesman and a broker, eventually owning his own office and as a broker for Red Carpet Realtors.  Harold retired again when he was 65.  He never met a stranger and was comfortable talking to anyone in any setting.  Children of all ages were his favorite people. He was a wonderful teacher and mentor to them.  He spent untold hours with his grandchildren, playing and telling stories. He was always good at offering sage advice to any of the young people in the family.  Harold met the love of his life, Edith Coppinger, in 1939 on a blind date.  They were married on March 15, 1940 and remained married until Edith’s death in 2002.  Harold loved to hunt and fish.  He often said he was happiest when he was in a boat fishing.  Harold and Edith spend a number of years travelling around in their travel trailer/motor home, finding all the hot fishing spots in Arizona, Utah, and Colorado.  They were blessed with four children:  Ken, Robert, Ralph, and Mary Ellen.  Harold and Edith instilled many wonderful qualities in their children and were very proud of all of them.    He guided his sons through Little League and Cub and Boy Scouts and had a positive influence on an untold number of young men.  Mary Ellen learned from her father how a man should treat a woman.  That was with kindness, gentleness, and non-violence.  Harold is preceded in death by his sister and brother-in-law, Vivian and Harold Spotts; his brother, Ralph Heisser; his son, Kenneth Heisser; and his wife, Edith Heisser.  In addition to Robert (Sandy), Ralph, and Mary Ellen, Harold is survived by grandsons, Ken (Roseanne) and Kevin (Nicole) Heisser; granddaughter, Kristin (Sean) Kulesza; and sister, Margaret Paddock.  Harold was also blessed with 6 great-grandchildren, one great-great granddaughter, and many nieces and nephews on both his and Edith’s sides.  The family would like to thank the caring staff at Beatitudes At Home; the wonderful staff at Pacifica Senior Living; and the Angels from Hospice of the Valley.  You know who you are.  A visitation will be held at Whitney & Murphy Funeral Home, 4800 E. Indian School, on Thursday, August 21, 2014, from 6:00-7:00pm with a prayer service at 7:00pm.  A Mass of Christian Burial will be held on Friday, August 22, 2014, 10:30am, at St. Thomas the Apostle Catholic Church, 2312 E. Campbell Avenue, Phoenix.  In lieu of flowers, the family asks that donations be made in Harold’s memory to Andre House, P.O. Box 2014, Phoenix, AZ  85001-2014.

Offer Hugs From Home Condolence for the family of HEISSER, HAROLD