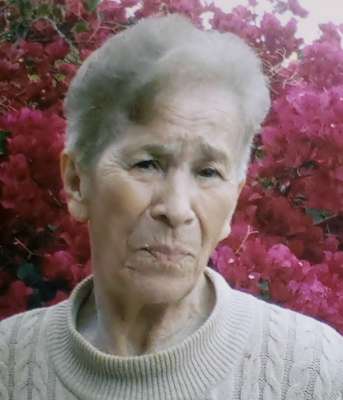 Cleo Hernandez, age 95 of Phoenix, Arizona passed away July 17, 2020. She was born in Chihuahua, Chihuahua, Mexico.  Predeceased by her husband of 59 years Eddie, and her daughter Rosa Lynn.  She is survived by her daughters, Marcella, and Molly, 4 grandchildren, and 6 great-grandchildren.  Also survived by one sister, Amalia Alvidrez.

Cleo came to live in Phoenix, Arizona in 1953.  She and her younger brother Lucio de la Garza came to Arizona to experience the American Life.  Shortly after arriving in Phoenix, Lucio started work at Valley National Bank as a teller, in their Downtown Branch.  Cleo worked for Woody Macayo, assisting him and his wife with the catering and banquets held in their restaurant “Woody Macayo’s. She also had other various jobs in Phoenix.  She attended Phoenix Technical School.  Where she took various evening classes, that she felt would help her life in Phoenix.  Cleo started taking citizenship classes in 1980 and became a naturalized citizen at the age of 57,  in July 1981.

Cleo met her husband Eddie through friends (They were cousins of his.), she met at her work place in 1958. They started dating and then married in December of 1958.  They has three daughters.  Their first child was born in September 1959 on the same day as her husband Eddie’s birthday.  Their second child was born in April of 1961.  Their last child was born in June 1969.  Their second child, Rosa Lynn was born with down syndrome.  Although it was challenging caring for a handicapped child.  They both took it in stride and treated Rosa as a normal child as much as possible.  Although, Rosa did not think of herself as handicapped, and took advantage of anyone who treated her otherwise.  Rosa lived to be 43 years, a week shy of her 44th birthday, under the loving care of Cleo.

Cleo and her husband were foster parents for many years.  Their household was home to various young children that came with nothing but the clothes on their backs.  When they left her home, it always broke Cleo’s heart, but she continued her foster parenting.  Many of the foster children that Cleo cared for called her begging to come back to her home.  She always tried to explain to them that it was better for them to be with their parent(s).  Cleo was a loving caring mother and foster mother to all children that entered her home.

Cleo loved to shop, although she never learned to drive.  Anytime someone asked her if she wanted to go out shopping.  She was ready at moments notice.   Cleo loved the JC Penny  clearance sales held in the summer around July, it became all day event, that she looked forward to attend.

Cleo lived a long life and experienced family life to the fullest.  She gave much more than she ever received.  She was at peace with herself and the life she lived.  She is now with her beloved husband Eddie their daughter Rosa, along with all the loving family predeceased to her.

Offer Hugs From Home Condolence for the family of HERNANDEZ, CLEO