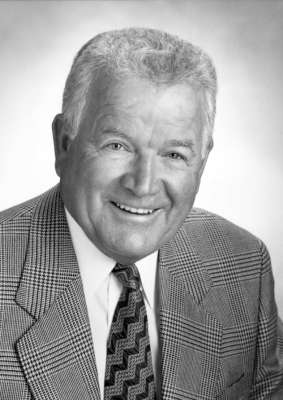 On Sunday, May 8, 2016, Gary Joseph Hewson passed away peacefully at the age of 82, surrounded by family and friends. Gary Hewson was born in Collingwood, Ontario to Francis and Elizabeth Hewson on November 2, 1933. He is survived by his twin brother, Donald G. Hewson of Stouffville, Ontario and preceded in death by older brother, Francis Hewson. Gary and his wife, Judy Ann Proctor, were married for 37 years and raised four children; Joel Hewson (Ogden, Utah) Gary J. Hewson Jr. (Los Angeles), Tyler J. Atwood (Jenna Yarborough) and Elizabeth A. Hewson (all of Los Angeles, CA). The December arrival of Parker Atwood made Gary a happy first time grandfather. Whether in Paradise Valley, Arizona, Los Angeles, California, or Whitefish, Montana, Gary enjoyed his time with family and good friends. He was an avid golfer and followed all sports religiously. Gary received a B.S. in Mechanical Engineering from the University of Toronto in 1956 and an MBA from Harvard Business School, Class of 1961. From there, he began what was to become a successful career in Industrial Real Estate Development. His first job was at Rutenberg Homes in Clearwater, Florida. He moved to

Boston to work at Cabot, Cabot and Forbes where he was a Project Manager/Financial Analyst, then a Senior Vice

President/General Manager of the Industrial Development Division in Los Angeles. In 1976, Gary formed The Hewson Company in Los Angeles and later opened an office in Phoenix, Arizona.   He was incredibly talented at knowing the numbers of the deal in an instant and his knack for “timing the market” allowed him to successfully develop over 20 million square feet of industrial and office product. He was very proud of the fact that his company survived for over 40 years competing against much larger developers in his field. Gary Hewson was a leader in Valley real estate development, setting trends in site selection and building product design and was one of the first to introduce the flex business park concept to Phoenix. He received numerous awards for his developing style and beautiful business parks and was the recipient of the 2004 National Association of Industrial and Office Properties (NAIOP) Lifetime Achievement Award. A self-proclaimed ‘deal junkie,’ Gary never underestimated the importance of good luck and strong relationships as the foundation to his company’s many successes. Gary was also involved in the Urban Land Institute for over 30 years, including positions with the Industrial and Office Park Development Council.

Gary Hewson will be remembered, not only for his developing style, but for his ability to forge lifelong friendships. Whether he was in a boardroom, a clubhouse, or a local watering hole, Gary made the place brighter. We will miss his infectious laughter, generous heart and zest for life. A private celebration of life is planned. For details, contact 480-829-1773. In lieu of flowers, please send a donation to Barrow Neurological Foundation, 350 West Thomas Road, Phoenix, AZ 85013 or www.supportbarrow.org.   Arrangements entrusted to Whitney & Murphy Funeral Home.

Offer Hugs From Home Condolence for the family of HEWSON, GARY JOSEPH