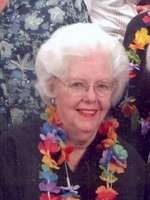 passed away Thursday September 13, 2012 at the Coronado Hospice Home. She was the only child of Selma and Albert Rosenberg, born July 23, 1929. After graduating from North High, she attended Stanford, Phoenix College, and was a member of Kappa Alpha Theta at the
U of A. On November 3, 1951 she married William E. “Bill” Hinkley at Trinity Cathedral. Together with a tiny bit of inventory purchased from her father’s company, New State Electric, they leased part of a red barn on Central Avenue and established Hinkley’s Lighting, with its icon chandelier on the roof. Barbara and Bill traveled on 4 continents and attended antique auctions, such as the MGM sale in Los Angeles, in search of antique lighting and accessories. With Barbara serving as Secretary, VP, and President of Hinkley’s Lighting, it became the go spot for everyone in the trade. Our community benefited greatly by her involvement with the Board of Visitors, Jr. League of Phoenix, Az. Society for the Blind, Trustee of the Heard Museum, Founding President of the Women’s Board of the Az. Kidney Foundation, VNSA, and the United Fund budget committee. She was also an amateur archeologist, pilot, published author, editor, linguist and loved all creatures, great and small.She is survived by her husband Bill, daughter Sandy (Robin) Shumate sons: Al (Theresa) and Charles, 7 grandchildren and 5 great grandchildren.At her request Private services have been held. “For I’ve had every blessing I’ve wanted, I’ve received far much more than I’m worth, And I’ll see what God has in store for me next, For I’ve had all I wanted on earth.” Barbara Hinkley March 20, 1978. Services entrusted to Whitney & Murphy Funeral Home and Post Scripts by Posey

Offer Hugs From Home Condolence for the family of HINKLEY, BARBARA ANNE