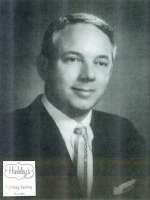 William Edward “Bill”/ “Hink” Hinkley, 86 passed away on Sunday November 4, 2012. 2 months after the death of his wife Barbara. A native Phoenician, he was born August 18, 1926 to Pearl Cox and Perce E. Hinkley. After graduating from Kenilworth grammar school, he attended North High and The New Mexico Military Institute. He graduated from Phoenix Union in order to finish mid year and enlist in the U.S. Army Air Corps where he served our country until the end of the war. Returning home he graduated from Phoenix College and attended ASU and the Uof A, as a member of the Sigma Nu Fraternity. In 1948, while doing the lighting for a play at Phoenix College he met a member of the cast, Barbara Rosenberg, her parents Selma and Albert were in he audience. He introduced himself and asked if he could drive her home, via the Corinthian Room. Romance blossomed and on November 3, 1951 Barbara and Bill were married at Trinity Cathedral. Impressed by Bill’s intelligence, sense of humor and friendly demeanor, after college, he was employed in appliance sales at New State Electric Co., by his future father in law. A natural in sales, he was put in charge of the lighting department, such as it was, located in an obscure corner of the mezzanine consisting of a few uninspired bulb holders, providing basic illumination with no thought to style or design. As Hink improved and expanded the merchandise selection, he also expanded his customer base. Upon the death of Mr. Rosenberg he and Barb bought the department’s inventory and leased part of a big red barn on Central Avenue, where Hinkley’s Lighting stands today; greatly expanded and improved with its icon chandelier still on the roof! Although Hink recognized the great growth of Phoenix as a vital part to Hinkley’s success, his business acumen and style were indispensible making him a well known and respected figure nationally in the lighting industry. Antique auctions, such as the giant MGM sale in Los Angeles, as well as annual buying trips made the showroom unique. Bill and Barbara traveled for years attending the Italian show where European manufacturers displayed their new products. Together they traveled on four continents to find antique lighting and accessories, making Hinkley’s Lighting a valued resource to the Design community. He always felt the best part of the business was the personal friendships he developed with a wide variety of customers and associates. Bill participated in the community as President of the Phoenix Sportsman’s Association, the Navy League, member of North Phoenix Rotary, Board of Animals Benefit Club, Arizona Club, Phoenix Country Club, Paradise Valley Country Club, and supported the Phoenix Zoo as a curator. He was a consistent contributor to any plea relating to animals! Hink and Barbara shared an interest in archaeology that bordered on obsession. They shared their extensive collection through publications such as Arizona Highways and National Geographic, and in actual donations of their collection to the Heard, Cave Creek, Dennis Sipe White Mountain Herford and Mesa Museums and the Amarind Foundation Museum in Dragoon, AZ. On a particular excavation, Hink uncovered an unidentifiable artifact and asked archaeologist Franklin Barnett if there wasn’t some reference book available. Barnett said no, so Hink offered to under write one if Barnett would author it. Suffice to say The Dictionary of Prehistoric Indian Artifacts of the American Southwest is now in yet another edition. Health issues brought his retirement in 1988. Barb continued to work until 2012, when she came home to care for him. Predeceased by his wife and business partner: Barbara, his parents and sister Gwen he is survived by, daughter: Sandra (Robin) Shumate, Overland Park, KS. 2 sons: Al (Theresa) Peoria, AZ and Charles Hinkley, Paola, KS. 7 Grandchildren and 5 Great Grandchildren. Private services have been held. In memory the family suggests contributions to Animal Benefits Club. He will be missed by family and friends. “I’ll grumble and I’ll rumble in the thunder’s potent tone, In chorus with my ancestors…I won’t be there alone. I’ll beacon your attention with the lightning’s lashing flare. If anyone should ask for me, just say I’m everywhere.”Written by Barbara Hinkley April 1981. Arrangements entrusted to Whitney & Murphy Funeral Home and Post Scripts by Posey.

Offer Hugs From Home Condolence for the family of HINKLEY, WILLIAM EDWARD “BILL”