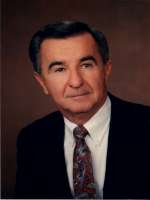 William David Hinz passed away May 9, 2010 at his home in Sedona, AZ. He was born in Erie, PA, August 19, 1938 to Kenneth Hinz and Dorothy Averill and moved to Phoenix, AZ in 1941. He was a graduate of Brophy Prep and Northern Arizona University. Upon graduation, he served two years in the Army. William had a long career in the Savings and Loan Industry, working for First Federal Savings and Loan and later President and CEO of Home Federal Savings/Great American Savings Bank. He later was involved in the hotel industry where he owned and operated several full service hotels. He also served as a director of Tucson Electric Power and was a Tucson Conquistador. He served as the President of White Mountain Country Club for two years. He retired to Northern Arizona spending the summers in Pinetop and winters in Sedona.

Offer Hugs From Home Condolence for the family of HINZ, WiLLIAM DAVID