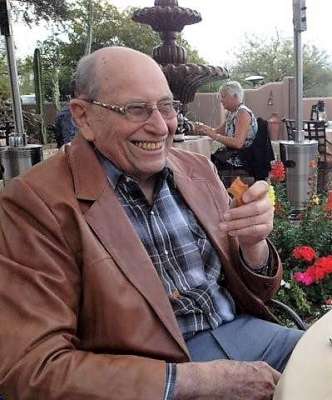 On June 27, 2017, in Scottsdale, AZ, Ken passed away and was reunited with his wife of 61 years, Marjorie Lou, who preceded him in death in 2007. Ken was born in Fairbury, NE, on July 12, 1924. He is survived by his son, Woody (Diane), two grandchildren, Ryan (Ann) and Jaime Mandarino (Steve) and six great grandchildren; Rachel, Jacob and Andrew Howe and Luke, Lily and Michael Mandarino. Ken served his country in the Air Force as a combat fighter pilot during WWII. He never met a stranger and had life-long friends. He loved cars and airplanes and a good martini. His family was his pride and joy and they never tired of listening to his stories. Facts never got in the way of a good story. Mass of Christian Burial will be celebrated Monday, July 10, 2017 at 10:00 am at St. Theresa Catholic Church, 5045 E. Thomas Road, Phoenix, AZ 85018 with a reception to follow in Fr. Feeney Hall. Interment will be private. In lieu of flowers, please donate to St. Timothy Catholic School, 2520 N. Alma School Road, Mesa, AZ 85210 or St. John Bosco Catholic School, 16035 S. 48th Street, Phoenix, AZ 85048. Arrangements entrusted to Whitney & Murphy Funeral Home.

Offer Hugs From Home Condolence for the family of HOWE, KENNETH FRANK