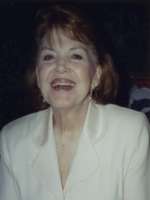 85, of Scottsdale, AZ peacefully passed away on December 23rd, 2012.  She was born in North Hollywood, CA June 20th, 1927. She moved to Arizona in 1950. Rose was youngest of five children. She is preceded in death by her husband Glenn who passed away in 1980. Mary was generous with her time and talents. She volunteered at St. Theresa Parish for years and made rosaries for the missions in Africa and supported many charities.  She will be dearly missed by her large circle of friends. Rosemary loved football, basketball and attending musicals and stage performances.  A Funeral Mass will be held at 10:00am, Thursday, January 10, 2013 at St. Theresa Catholic Church, 5045 E. Thomas Road, Phoenix.  Arrangements entrusted to Whitney & Murphy Funeral Home.

Offer Hugs From Home Condolence for the family of HUMPHREY, ROSEMARY JUNE