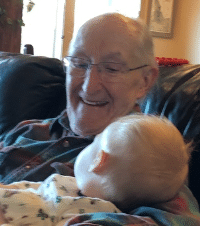 James Morgan Hurley MD, was born in Bisbee, AZ as the son of Pauline Easterling Hurley and Michael John Hurley. He was raised in Phoenix, AZ and died peacefully, at the age of 89, on April 27, 2021 in Prescott, AZ.  Dr. Hurley (Jim) attended North Phoenix High School and Phoenix Junior College before transferring to the University of Nebraska on a track scholarship.  After graduating in 1953 and completing a year of graduate work at the University of Arizona, he was accepted into the University of Colorado Medical School.  Upon graduation in 1958 with a medical degree, Dr. Hurley completed his internship and residency at Good Samaritan Hospital in Phoenix, AZ.

Dr. Hurley began a long practice of Family Medicine in Phoenix, first joining a group of three other physicians before opening his own office.  After more than forty years in private practice, he relocated to Prescott, AZ and joined a group of Family Medicine Specialists in Prescott Valley.  It was in this medical office that Dr. Hurley met a young intern and dear friend named Dr. Will Devito.  In 2004, Dr. Devito began a private practice, called The Doctor’s Office, in Prescott and the two became partners in that endeavor shortly thereafter.  Dr. Hurley continued what he loved, the practice of medicine, thru February of this year.  His hospital affiliations include Good Samaritan Medical Center in Phoenix and Yavapai Regional Medical Center in Prescott.

Jim joined the Arizona Air National Guard in Phoenix in 1959 at the rank of Captain and as a practicing physician.  In 1961 he was deployed to Germany as part of the Berlin Airlift and returned stateside nine months later.  Jim retired from the Guard in 1993 as a full Colonel and Commander of the Arizona Guard Medical Squadron.  He was credited with building and commanding the squadron from scratch, serving over 1200 guardsmen at the time the unit received their first outstanding inspection in 1990.

Graveside Service was held on May 19, 2021 at National Memorial Cemetery of Arizona, 23029 Cave Creek Road, Phoenix.  Donations in lieu of flowers may be sent to Disabled American Veterans https://www.dav.org.

Offer Hugs From Home Condolence for the family of HURLEY M.D., JAMES MORGAN