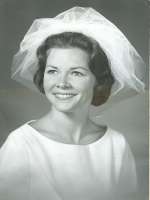 Passed away July 9, 2011 in Phoenix. Born May 13, 1938 in Hobbs, NM and married Patrick James Hurley June 15, 1963 in Phoenix, AZ. Madilyn Hurley attended the University of Arizona in Tucson, where she was a member of the Kappa Alpha Theta Sorority and obtained a degree in speech and language development. She later taught speech therapy in Phoenix. In addition to raising her family, Madilyn was president of the Junior League of Phoenix, also served in key leadership roles and as a volunteer with the Phoenix Board of Visitors and worked as a volunteer recording for the blind and assisted with Aid for Adoption for Special Kids and with the Parkinson’s Action Network. Madilyn loved her family, rose gardening, movies, dancing, woodworking and photography. She published “Oklahoma Prairie Recipes from Beatrice Hall McAllister” in 2007, including memories and recipes from her relatives there. Madilyn is survived by her children Meg (husband Chad) and their children Charles and Madilyn. Patrick (wife Bridget) and their children Patrick, Moira, Rory and Sean. Also survived by her sister, Marilyn B. Hurt, and numerous nieces and nephews. A Rosary will be held Thursday, July 14th, 2011 at 7 p.m. at St. Francis Xavier Catholic Church, 4715 N. Central Avenue, Phoenix. Funeral Mass will be held Friday, July 15th, 2011 at 1:30 p.m. at St. Francis Xavier Church. A reception will follow the service at the Phoenix Country Club after 3 p.m. In lieu of flowers, the family requests donations be made to the Muhammad Ali Parkinson Center at Barrow Neurological Institute, 350 W. Thomas Road, Phoenix, AZ 85013, In Memory of Madilyn B. Hurley.

Offer Hugs From Home Condolence for the family of HURLEY, MADILYN B.