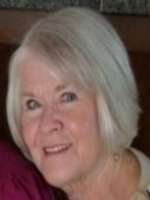 Jenny Lee Hutchinson, 71, of Mesa, Arizona, passed away peacefully at home on September 20, 2012 after a courageous fight with cancer. She was born in Red Oak, Iowa, a twin to sister Jeanie, and one of eleven children of James and Catherine Larkin. She grew up in Creston, Iowa and St. Joseph, Missouri, where she graduated from Lafayette High School. Jenny and her first husband Roger Claycomb raised their four children in St. Joseph, Missouri. She married her second husband, William Hutchinson, in 1984. They lived in Elk Grove Village, Illinois and then retired to Mesa in 1992. She was a charter member of Chalice Christian Church in Gilbert and served in several leadership roles at the local and regional levels of the Disciples of Christ Christian Church. She lived all facets of her life with energy and passion, or as Jenny would say “moxie,” be it family, politics, artistic projects, or her love of animals. She was preceded in death by her parents, sisters Janet, Joyce, and June, a stillborn daughter, and great grandson Evan. She is survived by her loving husband of 27 years William, son Michael Claycomb (Barb), daughter Christy Claycomb, son Scott Claycomb (Sue), and son Curtis Claycomb; step-son Richard Hutchinson (Tammy), step-daughter Janet Lundeberg (Bill), step-daughter Kate Hutchinson, and step-son Keith Hutchinson (Dana); 20 grandchildren and four great-grandchildren; and siblings JoAnn Bradley, Jeanie Morgan, Judy Kenney (Bob), Joy Pantelis (George), Jim Larkin, Catherine Jane Larkin and Janette Larkin. A Visitation will be held from 6 to 8 p.m. on Sunday, September 23 at Whitney & Murphy Funeral Home, 4800 E. Indian School Road, Phoenix, AZ 85018. A Memorial Service will be held at 2 p.m. on Monday, September 24 at Chalice Christian Church, 15303 S. Gilbert Road, Gilbert, AZ 85296. In lieu of flowers, memorial donations can be made to Hospice of the Valley at hov.org.

Offer Hugs From Home Condolence for the family of HUTCHINSON, JENNY L.