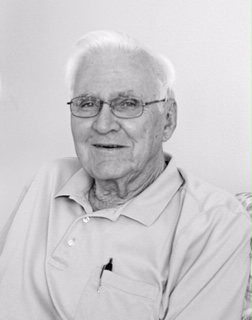 Al had a successful career in technical marketing and consulting. He moved his family to Canton, Ohio, in 1963 to take a position with Diebold. He later worked for Battelle Memorial Institute marketing consulting services. In 2000, following his retirement, he moved to Sun Lakes, Arizona.

Al was preceded in death by his first wife, Eleanor Marie, his second wife, Patricia Ann, and his dear friend and companion, Ruth Klarfeld.

He is survived by his three sons and their wives, Stephen and Laura, John and Christie, and Brian and Wendy, four grandchildren, Elizabeth, Lauren, Brent and Julie, and one great-granddaughter, Kyler.

Al began his career in engineering in New York, where his work included assignments relating to the Manhattan project and later, the United Nations Building. He and Eleanor raised three sons, moving from Long Island to New Jersey and later to northeastern Ohio.  While living in Ohio, Al was active in St. Michael’s Catholic Church, teaching Sunday school and serving at mass as a lay reader. He was also active in the men’s ministry and the Cursillo movement. Al served as an Assistant Scout Master and enjoyed camping with his sons.

After Eleanor’s death from cancer, Al was married to Patricia Ann. Together, they made the trek from Ohio to Arizona, following the migration of two of Al’s sons. They built a house in Sun Lakes and enjoyed many happy years there until Pat died from cancer in 2010.

Al sold the Sun Lakes house a short time later and moved to the Renaissance Retirement Community. While there, he became close friends with Ruth Klarfeld, who was his constant companion until her health required her to relocate closer to her family.

Al was generous and considerate, with a keen sense of humor. He was a kind and loving husband, father, grandfather and great-grandfather. He will be deeply missed by his family and friends.

Al’s family is extremely grateful to the staff of the Arcadia Grove Assisted Living Home and Hospice of the Valley for their thoughtful and compassionate care for Al in his final weeks.

Arrangements are entrusted to Whitney & Murphy Funeral Home with services to be scheduled at a later date. For memorials, please consider a donation to Al’s favorite charity, Doctors Without Borders.

Offer Hugs From Home Condolence for the family of IMBORNONI, ALBERT JOHN