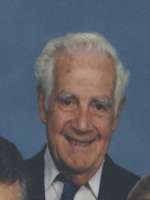 103, of Phoenix, Arizona passed away on January 30, 2011. Arthur was born in Settefratti, Italy on February 23, 1907 to Dominic and Maria Cristina (Pia) Ioli. Art lost his mother at the young age of 5 and lived with his grandparents as his father had immigrated to America. In 1920 at the age of 13 he traveled alone to join his father in Stamford, Connecticut. Due to health problems Arthur moved to Phoenix, Arizona in 1943. There he found work and friends and eventually met Helen Mae Donaldson who would become his wife of 56 years before her passing in 2006. Art had many occupations during his early years in Phoenix including machine work for Garrett AiResearch and working in the money counting room at the dog and horse tracks. Eventually he became a carpenter and supported his family building houses in the growing Phoenix area. Art was an active man all his life and enjoyed many sports but none as much as bowling. He was on championship bowling teams while working for Garrett and Universal Homes and even bowled against pro-bowlers and won. On his 100th birthday he bowled a 168 and was celebrated by his friends at the bowling alley and featured in the TV news. Art loved life and people and continued to make new friends wherever he went. He was fiercely independent and lived on his own until this past year. He will be dearly missed by his family and friends. Arthur is survived by his son Don (Darcelle) from his second marriage to Helen and their two children, Zane and Elena. He is also survived by two sons, Arthur and Edward, from his first marriage to Josephine Rinella. Visitation will be from 5-8pm with a Vigil at 7pm, Thursday, February 3 at Whitney & Murphy Funeral Home, 4800 E. Indian School Road, Phoenix. Funeral Mass will be at 1pm, Friday, February 4, at St. Thomas the Apostle Catholic Church, 2312 E. Campbell Avenue, Phoenix. Interment will follow at St. Francis Catholic Cemetery.

Offer Hugs From Home Condolence for the family of IOLI, ARTHUR