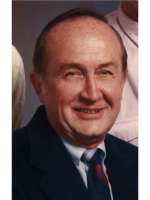 Marion A. Jabczenski, M.D., of Phoenix, AZ, passed away on December 13, 2012, after a long battle with Alzheimer’s disease. He was a devoted doctor, son, father and grandfather. The younger of two children, Marion was born on May 10, 1931 in St. Louis, Missouri to Felix and Marie Jabczenski. Marion came to Arizona with his family in 1963, after graduating from St. Mary’s University of Minnesota and St. Louis University School of Medicine. Marion began his career in Phoenix as a radiologist at Maricopa County Hospital and Doctor’s Hospital. Years later he opened his own business, The Breast Evaluation Center, where he dedicated himself to the fight against breast cancer. It became his life’s work to help diagnose and treat women with all stages of breast cancer, particularly striving to discover the cancer early enough that surviving was the outcome. Furthering his devotion to the cause, Marion was a pioneer in his field, developing and patenting numerous breast diagnostic and imaging tools. Additionally, Marion founded the Breast Cancer Foundation of Arizona. Marion is survived by his brother Felix; four children, Celeste, Elizabeth, Tony and David; and twelve grandchildren. He will be missed by his family and friends.
Closed family services will be held on Friday, December 21, 2012. In lieu of flowers, please make donations to the Susan G. Komen for a Cure (http://ww5.komen.org/donate/donate.html).

Offer Hugs From Home Condolence for the family of JABCZENSKI, MARION A., M.D.