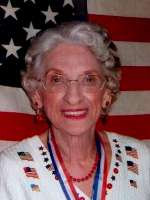 Loretta Jacks, 91, passed away peacefully on June 5, 2013 at Hospice of the Valley in Phoenix, Arizona.

Loretta was born to Michael and Anna Lester in Chicago, Illinois and was the last surviving of 8 children.  After moving to Phoenix in1947, she married Richard Jacks, raised her family and enjoyed a 25 year career at Motorola.  She loved being surrounded by friends and helping others. She had an infectious sense of humor and her smile would light up a room.  Loretta was an avid league bowler for many years, highlighted by winning a silver medal at age 86 and followed up the next year with a gold medal in the Arizona Senior Olympics.

She was preceded in death by her husband Richard in 2003. She is survived by her son Richard Jacks (Dawn), daughter Bonnie Anderson (Jack), granddaughters Cristie Anderson and Lauren Armstrong (Colin), and two great grandsons Grady and Finn.

We will miss our mom, but are grateful that she is no longer suffering from the dementia that robbed her of her precious memories.  Her spirit will live on in all that knew her.

In lieu of flowers, the family requests donations may be sent to Hospice of the Valley in Phoenix, 1510 E. Flower Street, Phoenix, 85014.

Offer Hugs From Home Condolence for the family of JACKS, LORETTA J.