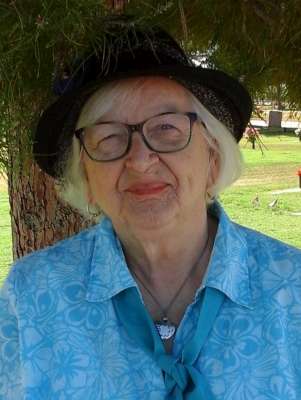 Yvonne Marie Jacobs, 85, of Phoenix, Arizona fought a courageous battle with breast cancer and was called to be with the Lord on Sunday, February 26, 2017. Her final days were spent in a loving environment surrounded by family and friends until the pearly gates opened to receive her. She was born on December 29, 1931 in Emma, Kentucky- the second born of seven siblings. Yvonne was preceded in death by her husband George Jacobs whom she married on October 19, 1967 and her parents Clyde and Rosie Jarrell, along with siblings Virgie Goble, Dorothy Shifferd and her son-in-law Bill Davis. Yvonne was blessed with a large and loving family. She is survived by her three daughters: Arlene Davis of Ypsilanti, MI; Phyllis (Irwin) Adams of Carrollton, TX; Casie (Jack) Harrington of Abbeville, LA and four sons: Doug (Vickie) Blackburn of Meriden, CT; Roy (Diane) Blackburn, Wayne Blackburn and Walter Blackburn of Phoenix, AZ; one grandson: she raised as her son, Wayne Richard (Sheryl) Blackburn of Meriden, CT; four brothers: Edward Jarrell of Ashland, KY; William (Eleanor) Jarrell of Oak Hill, WV; Walter (Helen) Jarrell of Mio, MI; James (Denina) Jarvis of Ypsilanti, MI; Brother-In-Law: Donald Shifferd of Wayne, MI; sixteen Grandchildren; thirty-one Great Grandchildren; five Great Great Grandchildren along with a host of cousins, nieces, nephews, friends and relatives and her faithful canine companion Layla. Yvonne was born to immigrant farmers of Irish descent during the depression and learned the value of hard work at an early age. The lessons learned during her youth molded her into a compassionate, generous and loving daughter, sister, wife, mother and grandmother. She was a woman who wore many hats. Her favorite employment position was with the University of Michigan in Ann Arbor. After relocating to Arizona, she obtained employment with the Arizona State University, the Arizona State Hospital and the Phoenix School District. Once retired, her charitable nature led Yvonne to serve the needy and homeless of the valley by providing monetary support, clothing, food and toiletries through her volunteer work with the indigent program at her church, Immanuel Baptist where she also served as a Deacon, Treasurer and Sunday school teacher. Funeral services will be at 9:30 am on Thursday, March 2nd at St. Agnes Catholic Church, 1954 North 24th St., Phoenix, AZ 85008. In celebration of the life of Yvonne Jacobs, family and friends are welcome to gather for refreshments in the Donohoe Hall immediately following the service. In lieu of flowers, donations can be made to Hospice of the Valley’s Ryan House. The family is especially grateful for the care Yvonne received.

Offer Hugs From Home Condolence for the family of JACOBS, YVONNE MARIE