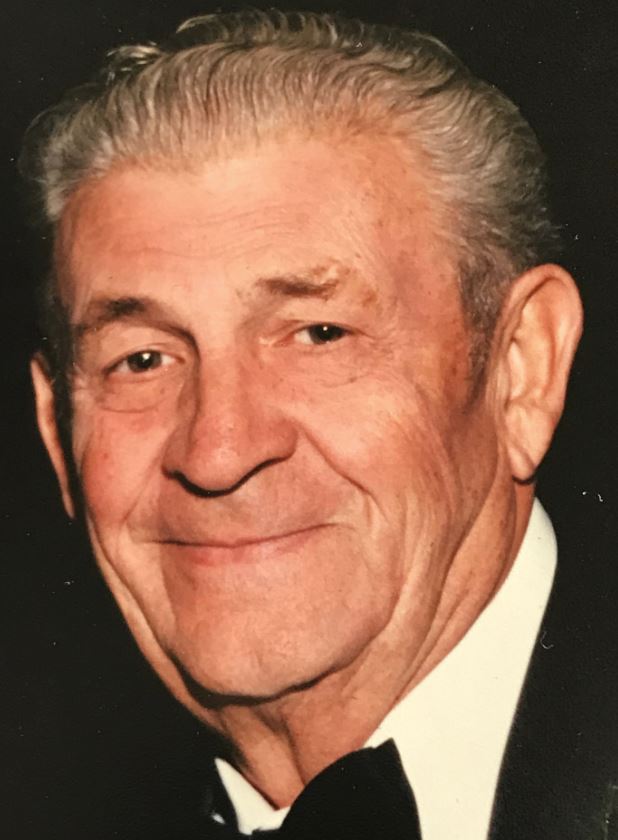 Stanley Joseph Jallo, 94, of Phoenix, died peacefully on Wednesday, February 7, 2018 at The Pueblo Norte Senior Living Community in Scottsdale, AZ. He was born October 8, 1923 in Hazleton, PA to Stanley Joseph Dzialo and Anna Tychinski Dzialo. Stanley Sr and Anna both emigrated to the United States from Eastern Europe as teenagers, settling in Hazelton where they met, married and had five children including Stanley Jr. Stan described them as “two of the most wonderful parents in the world”, and he had many great stories about his family and growing up in Hazelton during the depression years. The name Dzialo is pronounced Jallo, and the children all changed their name to Jallo after high school.
Upon graduating from high school, he attended the Pennsylvania State College in State College, in the school of chemistry and physics in the pre-medical course. However, his college career was quickly cut short due to World War 2, with Stan enlisting in the Navy and serving as a Pharmacist’s Mate. Upon honorable discharge from the Navy, Stan went back to his pre-med studies at Penn State and then was accepted at the Hahnemann Medical College in Philadelphia. He was awarded a degree of Doctor of Medicine at the 103rd commencement exercises of Hahnemann Medical College on June 15, 1950. Stan’s medical career took a quick turn with the start of the Korean War. There was a shortage of medical doctors so he enlisted once again to serve his country, this time as a medical doctor in the Air Force. On August 18, 1951 he received the Air Force Diploma for Aviation Medical Examiner class of the Air Force School of Aviation Medicine. Stan provided distinguished service in the Air Force, including reaching the rank of Major and serving as commanding officer of the 136th and 58th combat medical groups in Korea, during which time he was awarded the Bronze Star Medal for meritorious service, the Korean Presidential Unit Citation, the Korean Theater of War ribbon with three campaign stars, and the United Nations ribbon.
Upon honorable discharge from the US Air Force after the Korean War Truce, Stan returned to his family and his private practice medical career where he was on the staff of two hospitals in Meadville Pa in Family Medicine. After several years, Stan went to the Cleveland Clinic Hospital in a Fellowship program in Anesthesiology, where he worked as an Anesthesiologist before moving to Bellefonte Pa. to head the Anesthesiology Department at the Centre County Hospital. Stan worked in Bellefonte until 1968 when he and his family moved to Phoenix, Arizona. In Phoenix, Stan was on the staff of a number of hospitals, including Children’s Hospital, Good Samaritan Hospital, Doctors Hospital and St. Joseph’s Hospital. Stan had a long and distinguished career as an Anesthesiologist and was well respected and liked by hospital staff, doctors and patients across the Valley.
Stanley is preceded in death by his parents, Stanley and Anna; his brother Joseph; his sisters Helen, Jennifer and Dorothy; his wife Lucille and his wife Carole; his sons Martin and Richard; and daughters Jennifer and Leah. He is survived by daughters Deborah (Robert) Bostian of Seekonk, MA and Amy (David) Fink of Pacific Palisades, CA, sons David (Chrys) of Glendale, AZ, and Roger of Wichita, KS, sixteen grandchildren, sixteen great-grandchildren as well as an extended family of nephews, nieces and others.
Stan was one of the best of the “greatest generation”. He lived a life full of love and joy, great sadness at times, wonderful adventure and experiences, and personal achievement. He leaves behind family and friends who loved him and will miss him.
Burial will be private. In lieu of flowers donations may be made to Hospice of the Valley (www.hov.org)

Offer Hugs From Home Condolence for the family of JALLO, M.D., STANLEY JOSEPH