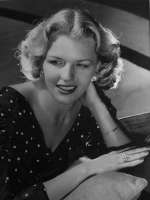 Mary Patricia Sullivan (Honey) James, a lifelong Phoenix resident, passed away March 3, 2013.  She was born on October 29, 1924, to Charles and Lamberta Sullivan, graduated from North High School and attended Mills College in Oakland, California She was married to David C. James, M.D. who preceded her in death in 1986. Honey was a long time member of the Iron Springs Club in Prescott, Arizona where she owned a cabin.   She was a member of the Phoenix Country Club, the Board of Visitors, the Phoenix Columbine Garden Club and the Jr. League of Phoenix. She was an avid bridge player; gourmet cook and hostess; and a knitting, crocheting, and needle point artisan. She and her husband, David, were married 39 years and raised four sons, Gordon, David, Edward, and John who survive her.  She is also survived by her daughters-in-law Lisa, Shari, Renée, Andrea, eleven grandchildren and eight great-grandchildren. A memorial service will be held at All Saints’ Episcopal Church, 6300 N. Central Ave. at 10:00 am on March 9, 2013.  In lieu of flowers, memorial contributions may be sent to the Cystic Fibrosis Foundation (Arizona Chapter) 5055 E. Washington St., Suite 130, Phoenix, Arizona 85034. Arrangements entrusted to Post Scripts by Posey and Whitney & Murphy Funeral Home.