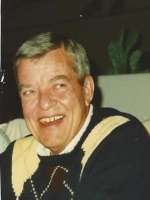 Beloved patriarch of the Jepson family, Jack C. Jepson, Sr., died on Tuesday, September 17 at the age of 89.  He was preceded in death by his wife, Joan Elizabeth, his two brothers, Jess Ransom and William Jepson, and his grandson, Jack C. Jepson III.  He is survived by his eight children Jack C. Jepson, Jr. of Greenwich, CT, Suzanne Poole, Jan Jepson, Sarah Smith and Marcia Jepson of Scottsdale, Claudia Mason of Phoenix, Patricia Niemczyk of Greendale, WI, and Mark C. Jepson of Lake Balboa, CA; his sister, Margaret Sulzer of Lakeland, FL; 16 grandchildren and six great-grandchildren.  He was born to Harriet and Charles Jepson in Wheeling, WV on September 7, 1924.  The family migrated to northeast Ohio in the 1920’s and settled in Willoughby, OH. Before being drafted in 1943 he was a star athlete at Willoughby Union High School.  He was a PFC in the 83rd division in the anti- aircraft artillery battalion in the European theatre earning the Campaign & Victory medals and four bronze stars. After the war, he fell in love with his future wife Joan with whom he would share the next 60 years.  He graduated from the Ohio Rubber Vocational School as a millwright on the GI Bill in 1951 and worked there for 23 years.   He was active in the URW Local No. 3 where he served as president during the turbulent 60’s.  Jack retired in 1970 and moved with his family to Scottsdale, AZ where he worked as the day manager for Etienne’s French Restaurant for 20 years.  Jack was a life-long New Deal Democrat who never shied away from political debate.  He was a champion of the underdog and a tireless advocate of the working people. Jack was an all-around athlete who excelled in bowling, softball, ice hockey, golf, and tennis.  Most of all, Jack was the loving and devoted patriarch of a large and diverse family.  This remarkable individual will live on in the memories of his children, grandchildren and great-grandchildren. He will be dearly missed by them and the many people whose lives he touched over the last 89 years.  Hail and farewell, Jack. Sic Transit Gloria Mundi.  Remembrances may be made in Jack’s name to Hospice of the Valley.

Offer Hugs From Home Condolence for the family of JEPSON, JACK C., SR.