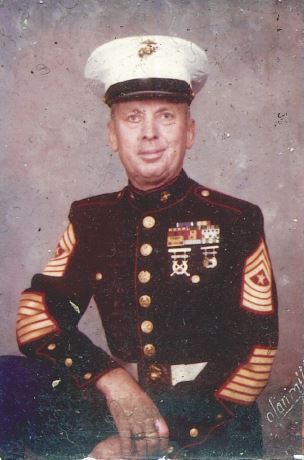 Charles L. Johnson (Sgt. Major USMC Retired) passed away April 15, 2019 at his home in Mesa, AZ after 91 full and blessed years. Born in 1927 in Cataract, Wisconsin to Alfred and Rachael Johnson, Chuck was one of 10 children raised on the family dairy farm. After graduating from the local high school and attending an agricultural college, Chuck joined the Marine Corps in 1948. On returning from the war in Korea in 1952 he married Helen Patricia (Pat) Deshler of Santa Ana, California. Together they raised six children – Philip, Susan, Steven, Kevin, Melanie and Mary (deceased). Chuck served his country as a proud Marine for 30 years, retiring in 1978. Then he worked for the Mesa Public Schools at Mountain View High School until 1994. While Chuck and Pat lived in Mesa they were active in the Central Christian Church and Marriage Encounter. They retired to Payson and were active in the Ponderosa Baptist Church and in the Marine Corps League in Payson until Pat passed away in 2012. Charles married a Payson neighbor and widower Viola Oberg from Oshkosh, Wisconsin in 2013. Chuck and Vi lived in Payson for several years before returning to Mesa where Vi cared for Chuck in his final years with the help of Chuck’s children and Vi’s children. Chuck is survived by his five children Philip (Daranna) Johnson, Susan (John) Campbell, Steven (Renee) Johnson, Kevin Johnson, Melanie (Scott) Darnell and by his caring and loving wife Vi and her seven children Terry (Leslie) Allen, Larry (Diana) Allen, Linda (Gayle) Allen, Scott (Jamie) Allen, Trace Allen, Jay Allen and Vicki (Keith) Maio. Chuck is also survived by his youngest brother Phil (Holly) Johnson of Stevens Point, Wisconsin. He is also blessed to be survived by seven grandchildren, 14 step-grandchildren and several great grandchildren and step-great grandchildren. Chuck and family appreciate the many dear friends that enriched his life.
A memorial service will be held at Whitney & Murphy Funeral Home, 4800 E. Indian School Road, Phoenix, AZ on Tuesday, April 23, 2019 at 11:00 am with a lunch reception at noon. The family requests that donations be made in Chuck’s memory to Hospice of the Valley www.hov.org and (602) 530-6900.

Offer Hugs From Home Condolence for the family of JOHNSON, CHARLES L.