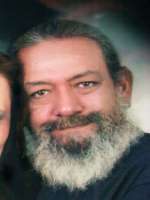 Edward Philip Johnson passed away on February 11, 2012. Edward was born August 6, 1953, in Phoenix as a 6th Generation Native of Arizona. He attended Alhambra HS and obtained his certificate in welding from Maricopa Technical School. Edward joined the U.S. Army and was honorably discharged in 1977. After the Army he traveled through the West Coast ending up in Alaska as a welder and working in other fields. When he returned to Arizona he met and married the love of his life, Arnie. He is survived by his wife Arnelda Hicks Favela Johnson; parents Edward A. and Amelia G. Johnson; sister, Juli A. Glascock, brother-in-law, Bobby J. Glascock; brother, Vincent P. Johnson; sister-in-law, Heidi Klomhaus; nephews, David R. and Christopher E. Glascock; Edward A. Johnson, II; niece, Amy J. Glascock; sister-in-law, Belinda Mims; stepchildren, Victor Favela Jr. and Mary J. Gibson, Aundrea and Derek Isbel, Rachel Favela and Paul Martin; grandchildren, Rainee Favela and Sawyer Gibson, Patricia Isbel, Sarah and Shaun Martin, his many Aunts and Uncles, and cousins from both the Rodriguez-Johnson and Gomez sides. Visitation will be held from 8-9:30am with a Rosary at 9:30 and Funeral Service at 10am, on Friday, February 17th, 2012, at Whitney & Murphy Funeral Home, 4800 E. Indian School Road, Phoenix, AZ 85018, (602) 840-5600.

Offer Hugs From Home Condolence for the family of JOHNSON, EDWARD