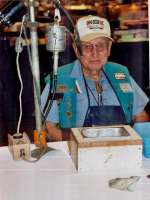 96, Passed away after a lengthy illness with his loved ones by his side Tuesday evening June, 18th 2013. He was born November 8th, 1916 on a dairy farm southwest of Chandler Arizona.  He was the second child born to Joseph W. Johnson and Delpha Lundquist Johnson.

Ellis graduated from Chandler High school where he excelled in sports.  He was awarded a football scholarship to BYU.  His education was cut short due to WWII and marriage.

While in the service in 1944 during WWII he received his wings as a fighter pilot and later transferred to George Patton’s 3rd Army in Europe where he participated in the liberation of France and also the evacuation of Buchenwald concentration camp.

While recuperating in Bushnell General Hospital, UT he learned to create his first Cabochons which sparked a long love of the Lapidary arts.

He is survived by his loving wife Gola (Dolly) of 66 years which he affectionately called his Pennsylvania chick (her home state).  They were sealed for time and all eternity in the Arizona Temple. He is also survived by his 5 children, Stephen Johnson (Joan), Jere Johnson (Dana), Kurt Johnson, Cheryl Johnson Wilcox (Roger), daughter Jeanette Arnold, 14 grandchildren, 26 great grandchildren, sister Loreen Ellsworth of CA, and brother Harold Johnson of UT.  He is predeceased by siblings Eula Walker, Forrell Johnson and Loren Johnson.

Offer Hugs From Home Condolence for the family of JOHNSON, ELLIS ADRIAN (ROCKY)