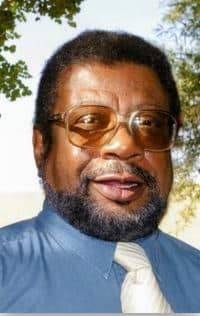 Keith Johnson was born in Phoenix, Arizona to Thelma and James Johnson. He was the oldest of nine children, his brothers and sisters in order were Patricia, Larry, Karen, Kevin, Kerry, Nita, Brian, and Natalie.

He was an honor student at Saint Matthew Elementary School, Saint Mary’s and Carl Hayden High Schools. He graduated with honors from Northern Arizona University with a degree in Psychology and attended Doctorial Graduate School at the University of Minnesota.

Keith was a talented athlete who enjoyed playing baseball and basketball. Keith was also a talented artist who loved western and sports themed art, music, reading and cars.

Church was important to Keith. He was a Methodist who converted to Catholicism in his midlife. He became active in the church and in the Knights of Columbus, where he became a Grand Knight.

He worked briefly in psychology but worked years as a professional educator. Keith had one son, Aaron Morris and together with Denise Waldrip they raised Aaron to adulthood.

Keith was preceded in death by his Father, James C Johnson, Mother, Thelma Austin Johnson, sister Karen Johnson Shaffer and brother Kerry Johnson. Keith is survived by his son Aaron, Denise Waldrip, six of his siblings, Patricia, Larry, Kevin, Nita, Brian and Natalie and a host of nieces and nephews and many friends.

Keith will be remembered for his inquisitive nature, sense of humor and his love of God.

He will be greatly missed!

Offer Hugs From Home Condolence for the family of JOHNSON, KEITH