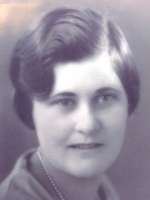 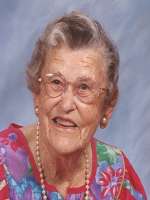 Leo was a 100 year resident of Phoenix. Her parents and five sisters; Carmella Crawford, Genevieve Burns, Catherine Sizemore, Mary Pat Cakos, and Elaine James preceded her in death. Leo was born July 15, 1907 in Taegus, ND and passed away August 28, 2011 at Huger Mercy Living Center were she had resided for the past three years. She will now be joining her parents and sisters in heaven where her family will be reunited once again. Arriving in Phoenix in 1911 with her father and mother, W.J. and Anna “Schreiber” Burns; and her older sister Carmella, they were met at the then railhead in Maricopa by Tom Whitney of Whitney & Murphy Funeral Home. They packed their personal possessions on the horse drawn buckboard and crossed into Phoenix using Hayden Ferry, as the Salt River was flowing and the Roosevelt Dam had not yet been built. Leo graduated from St. Mary’s High School in 1925. Her class consisted of six boys and six girls. She began her career as a Legal Secretary for 35 years at Kramer Roche, the predecessor to Streich Lang and now Quarles & Brady. After retiring from the law firm she did volunteer work at St. Joseph’s Hospital. Leo, when given the opportunity, rarely turned down a chance to play bridge with her many friends and family. As a single parent, she raised her three children, Barbara (Gene) Loy, James “Bill” (Kathy) Johnston, and Lowell “Dick” (Lea) Johnston. Leo is survived by her three children, 15 grandchildren, 22 great grandchildren and three great great grandchildren. Additionally she left 17 step grandchildren/great grandchildren. In her 90’s she still opened her home to her great grandchildren, helping them with homework and watching them until their mothers would arrive to take them home. The older Leo grew, the more she delighted in her great grandchildren and great great grandchildren. Leo left a legacy of longevity to her 43 descendants. Her great grandfather Patrick Casey (1812 – 1915) lived 103 years and she exceeded him. A Visitation will be held Thursday, September 1, 2011 from 6:00 – 8:00 pm with a Rosary at 6:30 pm at Whitney & Murphy Funeral Home, 4800 E. Indian School Rd., Phoenix. A Mass of a Christian Burial will be held Saturday, September 3, 2011 at 9:00 am at St. Mary’s Basilica, 231 N. 3rd St., Phoenix. Interment will follow at St. Francis Catholic Cemetery, where she will be buried with her parents and sisters. In lieu of flowers, the family requests contributions be made to Hospice of the Valley, 1510 E. Flower St., Phoenix, AZ 85014 or St. Mary’s Food Bank, 2831 N. 31st Ave., Phoenix, AZ 85009.

Offer Hugs From Home Condolence for the family of JOHNSTON, LEONILLA M