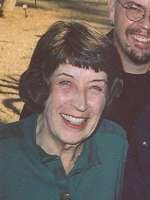 Marcia Carolyn Joyner, 75, passed away June 12th 2011, following a long illness. She was born March 28, 1935 in Cooperstown, New York. While serving in the United States Air Force in 1960, she married Walter Schuch and for 22 years was a homemaker in both Chicago and Tempe. She then met and married Larry Joyner and resided in Scottsdale, Arizona. Marcia retired in 2010 after thoroughly enjoying a 16-year career at Microchip Technology, Inc. in Chandler, where she was known as the “Voice of Microchip”. She was preceded in death by her husband Larry, son James, and sister Suzanne. She is survived by children John (Lisa Fetter) Schuch, Elizabeth (Todd) Sharp, Robert and William Schuch, grandsons Tony and Simon Schuch, granddaughters Allison Coombs and Sarah Stanhill and four nieces, Marta, Joanne, Charlenne and Patti. Her faithful dogs Mia and Dexter were her constant companions. Private services are being arranged by the family. In lieu of flowers, the family requests donations to the Arizona Animal Welfare League.

Offer Hugs From Home Condolence for the family of JOYNER, MARCIA CAROLYN