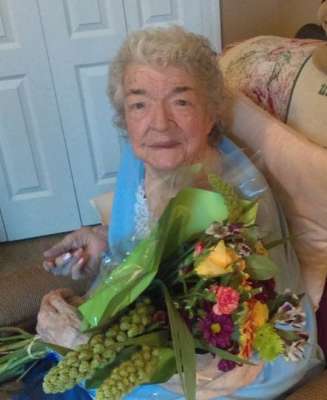 Carmelite Cecile Cudia-Judge was born on January 31, 1927 and passed away on March 8, 2016. Born and raised in New Orleans, Louisiana, Carmelite attended the University of Southern Mississippi where she met and married James Ray Judge, a soon to-be Methodist Minister. Perfectly suited to be a pastor’s wife, Carmelite loved music and epitomized Southern hospitality in the way she graciously treated others. Together they raised a family of six children while ministering at numerous churches throughout central Mississippi for more than 20 years. In 1971, Carmelite moved to Phoenix, Arizona with her family, where they lived for the next 45 years. Carmelite was preceded in death by her parents Edmond and Ruby Cudia; husband Reverend James Ray Judge and daughter Edmalita Judge. She is survived by four daughters; Rayanna Fields, Mary Zins, Monica Schluckebier and Daphne Boudreaux; one son, James Judge; five grandchildren and six great-grandchildren. Funeral service will be held at 11:00am on Tuesday, March 15, 2016 in the Chapel at Paradise Valley United Methodist Church, 4455 E. Lincoln Drive, Paradise Valley, AZ. Viewing will commence at 10:00am. Burial procession follows to the National Memorial Cemetery of Arizona where Carmelite will be placed with her husband.   In lieu of flowers, please make contributions: “In Memory of Carmelite Judge” to United Methodist Outreach Ministries, 3333 E. Van Buren, Phoenix, AZ 85008.

Offer Hugs From Home Condolence for the family of JUDGE, CARMELITE CECILE CUDIA