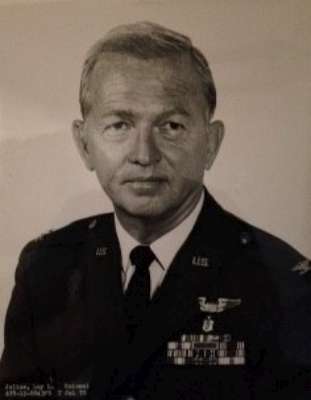 Loy L Julius passed away on the morning of February 10, 2017 at the age of 96.  He was born on July 2, 1920 in Cherokee, Iowa.  After graduating from high school, he attended the University of Iowa where he excelled in wrestling.  He was Big Ten Champion, Team Captain, and an All American ranked 4th in the nation.  He graduated with a degree in accounting.  After the attack on Pearl Harbor, he joined the Army Air Corp in 1942.  After flight training, he was the captain of a B-26 Martin Marauder.  He and his crew were assigned to the European Theater and the 397th Bomb Group in February of 1944.  He flew 65 missions including 2 missions bombing the Normandy beaches on D-Day, June 6, 1944.  Among his many decorations and awards are The Distinguished Flying Cross, The Air Medal with 12 Oak Leaf Clusters, the Meritorious Service Medal, The Air Force Commendation Medal, The Distinguished Unit Citation, and the Legion of Merit.  He met and married his wife Anne in London.  After his return home he was accepted into the University of Iowa College of Dentistry and graduated in 1950.  He then began his 30 year plus career as a dentist in the Air Force.  His assignments included Randolph AFB, Texas, the U.S. Air Force Academy in Colorado Springs, Osan Air Base, Korea, Francis E Warren AFB, Wyoming, Luke AFB in Phoenix, and Travis AFB, CA.  After his Air Force career he was Associate Professor at Creighton University College of Dentistry and taught Clinical Oral Surgery for 11 years winning the Outstanding Dental Instructor award 7 times, and the Kennedy Award as Outstanding Instructor of Creighton University before retiring in 1985.  He retired in California for the next 27 years and spent the last 4 years in Anthem, AZ.  Golf was his passion scoring 6 hole-in-one’s and he kept busy with daily walking, swimming, and biking, and traveling around the world.  He is survived by his wife, Anne, five children, John, Jane, Jean, Janice, and Joany, 6 grand children, and 6 great grand children.  Graveside Service will be at the National Memorial Cemetery of Arizona, 23029 N. Cave Creek Road, in Cave Creek on February 22, 2017 at 2:30 PM.

Offer Hugs From Home Condolence for the family of JULIUS, LOY L.