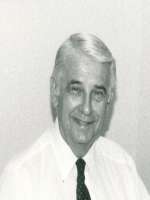 Joseph Walter Karas, 90 of Phoenix, Arizona passed away peacefully on February 18, 2013.  Born in Chicago, Illinois on October 22, 1922.  Joe was raised in the Chicago area and went to Europe in WWII with the US Army.  Shortly after returning from the war he married his high school sweetheart Dorothy on May 5, 1946.  Together they raised two sons, Joe and Tom.  In 1968 the family was moved from the Chicago area to Phoenix by his employer Motorola.  Joe finally retired after a 35 year career with Motorola as a Mechanical Engineer in 1988.  Joe is survived by his two sons Joseph T. Karas and Thomas A. Karas.  Funeral Mass will be at 10:00 AM Thursday February 28, 2013 at St. Theresa Catholic Church, 5045 E. Thomas Rd, Phoenix.  Entombment to follow at St. Francis Catholic Cemetery.

Offer Hugs From Home Condolence for the family of KARAS, JOSEPH WALTER