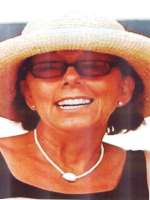 Roberta “Bobbie” (Carson) Kase, 64, passed away peacefully due to complications from pneumonia on February 13, 2013. She was born on October 20, 1948, in Franklin, Pennsylvania, and received her undergraduate degree from Mercyhurst College. After college Bobbie met and later married her true love Thomas Kase in 1974. Tom and Bobbie settled in Phoenix, Arizona, where she worked as a Catholic school teacher. Bobbie was an active member at St. Thomas the Apostle School and Parish where she was a member in Our Lady of the Assumption Sodality and pioneered the Spanish program at St. Thomas the Apostle School. Bobbie treasured each of her students who affectionately called her “Señora.” Bobbie’s family and friends will remember her for her genuine love of others, her unwavering faith, and her insurmountable strength, especially during a miraculous recovery from a stroke she recently had. Bobbie is survived by her husband Thomas, her sisters Patricia Hollers, Janet Lee, and Laurie Carson, her children Shelly Bogetich-Klose (husband Christian Klose), David Kase (wife Sinead Kase), and Megan Kase, and grandchildren Wilhelm and Charlotte Klose. She is preceded in death by her parents Robert and Carmelina (Vendetti) Carson. A Visitation will be held on Monday, February 18 from 6pm to 8pm at Whitney & Murphy Funeral Home, 4800 E Indian School Rd, Phoenix. Funeral Mass will be held on Tuesday, February 19 at 10:30am at St. Thomas the Apostle Catholic Church, 2312 E. Campbell, Phoenix. Interment will follow at St. Francis Catholic Cemetery.  In lieu of flowers, contributions may be made to St. Thomas the Apostle.

Offer Hugs From Home Condolence for the family of KASE, ROBERTA “BOBBIE”