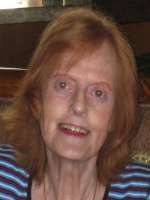 Nona F. Kasper, 76 of Pittsburgh, PA died with her family by her side in Scottsdale, AZ on April 16, 2012 after her courageous battle with heart disease. Nona, a caring and loving mother, was also a Caregiver as her profession for many years. She was a member of St. Thomas More Catholic Church in Pittsburgh. Born in Troy, NY and resided in Latham for 40 years, she was the daughter of the late Dr. James and Liberata Baker Fitzgerald. The former wife of Robert J. Kasper and the mother to the late Robert P. Kasper, James W. Kasper of Pittsburgh, Cheryl L. Golden and her husband Tim of Seattle, the late Nonnita T. Kasper of Pittsburgh and Mary T. McGarey and fiancé Tom Horn of Scottsdale. Nona was the sister to Dr. James Fitzgerald and his wife Ricca of Charleton, Gerald B. Fitzgerald of Loudonville and Esther Coleman of Clifton Park. She was the devoted grandmother of Troy Kasper, Alexis Taylor and Connor and Logan McGarey. Aunt to many nieces and nephews and special friend Elton Petersen. She was predeceased by her siblings: Rev. William B. Fitzgerald, Francis Fitzgerald, Vincent Fitzgerald, Mary Therrien,Jack Fitzgerald and Joseph A. Fitzgerald,Latham. A Memorial Mass will be held April 27th, at 9AM at St. Theresa Catholic Church, 5045 E. Thomas Road, Phoenix. Inurnment will take place at a Graveside Service for family at the Albany Rural Cemetery in June 2012. Special heartfelt thanks go out to the staff at Scottsdale Village Square and Serenity Hospice of Scottsdale.

Offer Hugs From Home Condolence for the family of KASPER, NONA F.