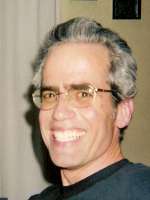 David Joseph Keating, 49, passed away July 25, 2013, peacefully at his home in Glendale, Arizona, with his mother, Joan Keating Sikon, by his side.  He was a graduate of Phoenix College and Northern Arizona University.  All music was very important to him and he enjoyed many types of music.  David was an especially enthusiastic Dead Head, travelling to Grateful Dead concerts all over the country.  He was also an avid photographer and an accomplished small figure sculptor using wire armature and clay.  As the youngest of nine children, he participated in and memorialized many family events.  His artistic photographs and sculptures are family treasures.  He is survived by his mother, stepfather Chester Sikon, sister Janet McNaughton (Barry), sister Kathy Thurber, sister Helen Romesburg (Rex), sister Carol Minters (Jerry), sister Karen Boyd (Carl), brother Raymond Keating (Donna), sister Beth Malleo (Dave), and brother Michael Keating, and many nieces and nephews.  He is preceded in death by his father, Raymond Joseph Keating, and his brother-in-law, Duane Alan Thurber.  He will be greatly missed.  His Funeral Mass will be held at Saint Mary’s Basilica, 231 North Third Street, Phoenix, AZ, at 10:00 AM, Saturday, August 3, 2013.  In lieu of flowers, the family suggests that donations may be made to the American Cancer Society or the Crohn’s and Colitis Foundation of America in David’s name.

Offer Hugs From Home Condolence for the family of KEATING, DAVID JOSEPH