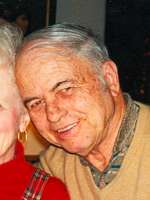 William James “Bill” Keenan, 81, passed away peacefully June 7, 2010, at the Arizona State Veterans Home in Phoenix. Born December 22, 1928 in Minneapolis, MN, Bill was raised by his parents, William Sr. and Gladys, in Minneapolis. He enjoyed an active childhood, developing a life-long love of sports, including golf, tennis, football, baseball and basketball. He graduated from high school at St. Thomas Catholic Military Academy, where he earned a football scholarship as quarterback to the College of St. Thomas, in Minneapolis. After a knee injury, he transferred to the University of Minnesota, where he graduated with a Bachelors degree in Journalism. While at the university, he was a member of Delta Kappa Epsilon fraternity. He also worked in his father’s printing company, Wm. Keenan Printing, and as newspaper reporter for the Minneapolis Parks and Recreation Department. It was there he met and fell in love with Kay Keenan, a fellow U of M student. They married in 1951, and through the years, had 5 children. Upon graduation, Bill enlisted in the U.S. Air Force, where he attained the rank of 1st Lieutenant. He and Kay were stationed in Newburg, NY and Metz, France. After honorable discharge from the Air Force, Bill and Kay returned home to Minneapolis. Bill worked as a copywriter and account manager in the advertising industry, at Barackman & Assoc. and John Forney Advertising Agency. He supervised many national accounts, and was President of Advertising Club of Minnesota in 1969-70. During these years, Bill volunteered as a coach for many grade school football and basketball teams. He also was a scratch golfer, still played basketball with his childhood friends and was a champion tennis player in the Minneapolis City League. In 1971, the family moved to Phoenix, where Bill held various marketing and management positions for Armour Foods Corp, including National Sales Manager. He developed many product lines for Armour, including the Great Escapes and Dinner Classics frozen dinner line; fine frozen seafood for restaurants; and meals provided nationally and internationally to the airlines industry and U.S. Military. He motivated hundreds of sales managers to success with travel awards for top sales managers, leading and coordinating yearly sales meetings to prize destinations such as Captiva Island, FL and St. Simons Island, GA. Also during these years, he continued to coach his sons and their friends Little League Baseball and Pop Warner Football teams in the Arcadia neighborhood of Phoenix. In 1985, Bill’s employer, Armour Foods, was sold to the ConAgra Corp. in Nebraska, and Bill and Kay moved to Omaha. They lived in Omaha for 5 years, and upon retirement from ConAgra, returned to Phoenix. Since their return to Arizona, Bill kept busy playing golf; watching sports, especially his grandchildren playing sports; his retirement club, the Armour Amigos; travel to Hawaii, the East coast and Midwest; and enjoying their friends, children and grandchildren. He always conveyed to his children the value of hard work and persistence and was incredibly proud of all of their achievements. Bill was preceded in death by his wife, Kay, in 2009. He is survived by daughter, Colleen (John) Wynne; son, Kevin (Anne) Keenan; son, Tim (Lisa) Keenan; daughter, Maureen (Alex) Vakula; daughter, Kara (Theo) Goldin; 17 grandchildren, and 1 great-grandson. A Visitation will be held Monday, June 14, 2010 from 6-8 p.m., with a Scripture Service at 7 p.m., at Whitney & Murphy Funeral Home, 4800 E. Indian School Rd. The Funeral Mass will be held at 10 a.m. Tuesday, June 15, 2010 at St. Theresa Catholic Church, 5045 E. Thomas Rd. Interment will follow at St. Francis Catholic Cemetery. Family has requested any donations in his name go to the Arizona State Veteran Home, 4141 North S. Herrera Way, Phoenix, Arizona 85012.

Offer Hugs From Home Condolence for the family of KEENAN, WILLIAM J