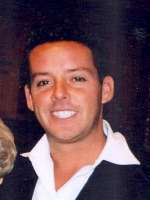 Blue, 38, passed away Tuesday evening, October 16th in Prescott, Arizona. A Phoenix native, Blue was born on February 21, 1974 to Sandy and Vince Keeton. He lived a beautiful life filled with fabulous friends, family, and more love and smiles than imaginable. He had a great love of sports that began at an early age – playing soccer, baseball, and then moving on to Arcadia football. He was an avid sports fan, to say the least. The two teams he took most pride in were ASU football and the Boston Red Sox. He loved experiencing new stadiums and hitting the road to see his teams play on different fields. His travels found him in conversations with the locals and he instantly became a part of the town based on his new friends and knowledge of the surroundings. He cherished his times with all his friends and family. Blue is so loved. His mother, Sandy; brother and sister, March and Chais (Dan) Ondeck; and nephews and niece, Thomas, Keeton and Andie; and all of you will miss him deeply, but his light will shine on us forever. A Memorial Service will be held at 1:00 P.M. on Monday, October 22nd, at Paradise Valley United Methodist Church, 4455 East Lincoln Drive, Paradise Valley. In lieu of flowers donations may be made to the Arcadia Football Boosters in Blue’s, #11, honor.

Offer Hugs From Home Condolence for the family of KEETON, BLUE DAVIS